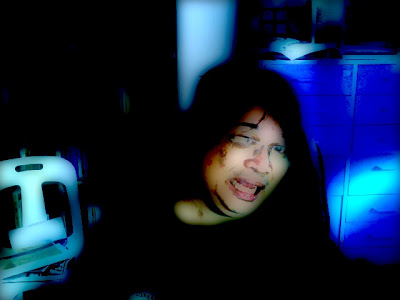 So, this Hollywood producer I know who's been trying to get "Vampire Junction" made for years gets this response from one of Hollywood's biggest big-shots: He felt that it was a brilliant book, ahead of its time, groundbreaking--- but that the elements that made it unique and special have since (his quote) "been done to death".

What does this prove? Well, I think it proves that it never pays to have any original ideas. The person who makes money off the idea is never the originator, but the guy who comes in on one's coattails.

Meanwhile, thanks to all of you who logged onto www.thedragonstones.com to read the first two chapters of the new trilogy; since the number of hits has reached 100, I've added another chapter. However, I think I will set the next bar at 300 hits for adding Chapter 4.

Having another gout attack today. Ouch! Losing 100 pounds should do it, but it's a lot easier to lose it from the bank than from the paunch. It was so bad I had to record my radio show at home, but I'm making up for it by including a thirty minute piece by Schnittke in the show. That'll wake 'em up!!!
Posted by Somtow at 1:05 PM