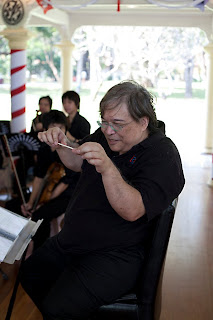 When I was a child, my two great-aunts, wives of King Rama VI, were still very much alive.  We would often go and visit them on a Sunday afternoon.  They had many stories to tell about life at court —some of them quite scurrilous by today's standards — but most of all they told of a time devoted to music and drama and poetry, where every day someone was putting on a production at court.

In 2001 when I composed the opera Madana it was to help in the restoration of one of King Rama VI's palaces in Bangkok which had seen many uses since the WW II and was now part of a hospital.  When I saw my great-aunt's royal bedchamber converted into a radiology lab, it was a very strange feeling, as the doors still had the stained-glass images of roses from the play Madanabada which King Rama VI dedicated to my great-aunt Praphai (HM Queen Indrasakdisachi.)

Ten years later we were invited to bring the kids of the Siam Sinfonietta to another palace that was a residence of my great-aunt, the seaside palace of Mrigadayavan in Hua Hin.  When we arrived I had the opportunity to stroll through the "women's quarters" which would in those days have been absolutely forbidden to any male except the king himself, and to see the room she slept in, including a pink dress she once wore, laid out, the mosquito netting spread over her bed, and a wedding photograph on the dressing-table.  It was a very strange feeling; I could hear her voice in my head.  The last time I ever spoke to her was at the funeral of my great-great-aunt, Indrasakdisachi's mother.  In the midst of that spectacle Her Majesty my great-aunt said about me, "Watch out for that kid.  He's not afraid of anyone!" 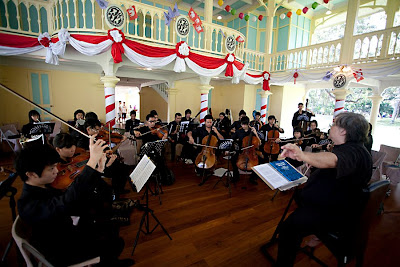 Imagining her as a young woman in the baby-blue painted room wearing the pink flapper dress, I remembered the stories she and her sister, Phra Sucharitsuda the royal consort, used to tell me.  Suddenly the palace was not an empty place but full of the sounds and colors of the 1920s.

The concert took place in a royal hall that was open to the garden.  There was a balcony where the king used to sit to watch the proceedings - often his own plays being performed with my great-aunts as some of the key players.

So when we performed, when we rehearsed in that hall, it was like reliving that era.  I think the feeling of magic infected all the kids as well.  The Mrigadayavan Palace people put us up in some beautiful seaside cottages right there on the estate and there was swimming and beach play every morning.

On the Saturday the kids played a Haydn, Rossini and Mozart programme ... sadly, the flute player's father passed away during the weekend and he had to run back to Bangkok.  The concert was well attended and afterwards we had some wonderful rehearsal time to start getting into "Peter and the Wolf" and Mozart's 39th Symphony. 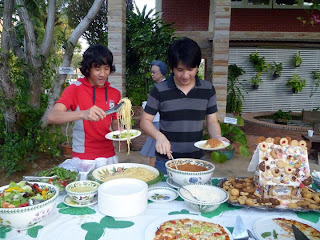 The next day we had a splendid mini-concert at another royal residence, the Chom Dong Villa which was a former home of HM Queen Rambhai Bharni, who was queen during the reign of Rama VII.

The concert was accompanied by a lovely pizza dinner served from Chom Dong's huge outdoor pizza oven.  Celebs there including Patravadi the well known Grand Dame of avant-garde theatre accompanied by the kids from the school she has founded for brilliant young theatre arts teenagers. 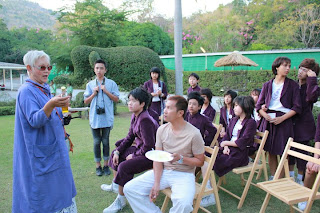 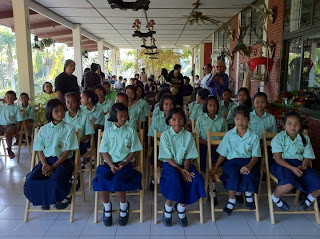 There were also about 50 kids from another local school who completely new to classical music, and that was fun as well.

These are the kinds of events that make all this angst I go through worth while.
Posted by Somtow at 1:14 PM No comments:

I've been in bed with an assortment of drugs (painkillers mostly) for the last three days; CARMEN was a tremendous strain, but it was really the Amanpuri that finished me off.  However, in retrospect the Amanpuri fiasco seems more comedic than tragic.  Even though it seems abundantly clear that my currently being laid up with dengue fever is a direct result of the trip to Phuket.


On the other hand, the Bundit scandal, which started off as something mildly amusing, is now turning into a global can of worms.  The letter which Klaus Heymann sent me evoked responses within a matter of hours.  A young Thai opera fan named Parkorn, for instance, wrote: "I have compared "Royalty-Free" Let The Bright Seraphim with the recording from Joan Sutherland - The Art of the Prima Donna, a studio recording with Francesco Molinari-Pradelli conducting the Royal Opera House Orchestra. Exact match."


Surely these can't all be misunderstandings, errors in software, or simple cases of mistaken identity.  It's clear that, though his intentions might have been innocent enough, K Bundit's crafty marketing ploy was tragically flawed because his source was flawed.  Far from being a major player in the classical compilation sweepstakes, it turns out he is not even a major a player in the resultant piracy scandal.


I do hope he follows my advice, which is to remove any even remotely suspect items from the market until the matter is cleared up.  Unfortunately that would entail taking the entire compilation series off the market.  That would be the safest thing to do.  There are plenty of performances that CAN be licensed for compilations from sources that are not suspect.  It shouldn't take long to assemble an equally impressive compilation from such sources -- or, with a bit of investment, to record them himself with a decent orchestra.  Bulgaria and Czech Republic are good sources if he'd like to make his own recordings with orchestras that can be deemed "international", and they are as cheap as the Bangkok Symphony.


Thailand is always being accused of being a haven for piracy. It would be a shame if one of Thailand's best known artistic figures became a piracy "poster boy" ... especially if he had no intention of using material that might not have been legally obtained.


In my next blog I will talk only of positive things :)
Posted by Somtow at 9:56 AM No comments: