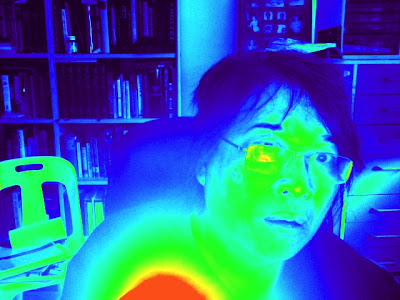 Years and years ago ... about three decades ... when I was an enfant terrible and not the eminence grise that I am today ... there was a peaceful student protest in Thailand that was bloodily put down by the Thai military. Martial law was imposed and, in order to justify their coup, the generals fabricated visual evidence of a plot against Thailand's most cherished institution, complete with doctored photographs of non-existent scenes of students desecrating these sacred symbols. Their control of the media was absolute, and the somewhat incompetently retouched photographs were not questioned for years.

Last week's situation was rather different. A violent protest, whose leaders (some genuinely idealistic, with real grievances) were simply unable to control the mob they had hired, was dispersed by the military under the firm control of civilians, with minimal violence and no direct deaths. (Two residents, incensed at having their homes invaded, were killed in a brawl with the protesters. The evidence seems to point the blame firmly on the protesters, although they are no trying to say that the killers were army militia in disguise.)

The government made no attempt to control the media, and yesterday allowed an open, televised debate on what happened. It was important to do that because the opposition, using the old playbook from the days of bloody coups, had made the assumption that there would be a huge mess and that in response the people would rise up to throw out the government.

When that didn't happen, there was no backup plan. If they couldn't show that this was a bloody and oppressive crackdown, the credibility of their cause -- including their genuine grievances -- would disintegrate. Which is a pity, because the genuine grievances ought to have been best served by a parliamentary process.

What we witnessed today is not going to be on CNN, because it's hours and hours of debate in Thai, and it doesn't have burning buses or angry mobs beating up cars. But it was far more important that what was shown on CNN because it showed a new kind of governance in action. The government was made accountable for what it did, and charges, even the most far-fetched, were able to be aired.

We watched the representative from Phayao give an impassioned and moving speech about a woman, whom, she said, had been dragged by the hair by a soldier. She played a video clip and indeed, it appeared shocking. Indeed, we had seen the same clip on CNN. She cited the U.N. charter on human rights and demanded that the prime minister immediately step down in response to what had been done to this woman.

The short, attention-getting video clip that looks really bad was of course, right out of the 1976 playbook. It had worked well for the generals, who got away with killing hundreds of unarmed students thirty years ago. Could the same technique be used to prove that Abhisit's virtually bloodless disbanding of the protest was in fact a bloody crackdown? Certainly, the representative's rhetoric was powerful.

But this is a different era. For one thing, the clip wasn't the only recording of the scene. The media had been present throughout, and it was therefore easy to produce any number of complete, unedited videotapes of the entire scene that had transpired. The clip shown by the representative showed someone dragging a woman, true ... you had to just believe their contention that it was a member of the military in disguise. But the entire tape showed clearly that this was an altercation between the red shirts and the press, and the only military intervention was to break up the squabble. It also showed these women (whom the representative described as pitifully imploring, grovelling in front of the soldiers and bringing them water) screaming obscenities at the press and being physically in-your-face for a very long time before someone decided to make it a brawl. When another representative stated that the person attacking the woman was a soldier disguised as a civilian, and gave his name, rank, and serial number, it seemed almost childishly simple for the government to rebut with produce pictures of that same soldier to show that he looked nothing like the attacker in question.

It became increasingly clear that the short clip in question was a Rorschach test: one could see a brutal suppression if that was one's agenda, and one could also see any number of alternate scenarios.

The C-span-like coverage is a first, I think, for this country, but we got to see all sorts of things people didn't want us to see ... because the cameras were unflattering to both sides, and didn't attempt to create a novelistic story out of it.

In short, times have changed since the days when you could produce a single photograph to prove your conspiracy theory. Someone, somewhere videotapes everything these days. From surveillance cameras to passersby with iPhones, there are always points of view you cannot control. Let's hope they all learn to deal with it.
Posted by Somtow at 9:51 PM