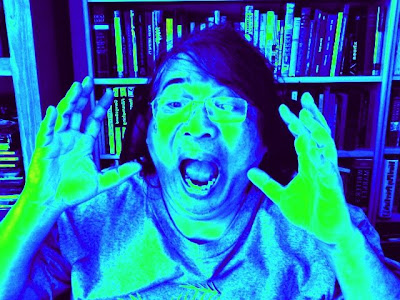 My quest for exciting news about the Taliban takeover of Pakistan and other world-shattering events on CNN was interrupted by a panel of experts discussing Miss California's "position" on same-sex marriage. It was infuriating that the heartfelt, if brainless, remarks of this physically astounding specimen of womanhood should generate such punditry, and it got me to thinking....

What is it about the word "marriage" that upsets people so much? If a same-sex couple were perchance to receive all the legal rights and protections they should be getting, why would they still insist on the word "marriage?" Conversely, if you were not a same-sex couple, but you didn't mind them getting the various legal benefits of a civil union, why would you care enough to deny them the satisfaction of using the M-word?

At this point, such hallowed phrases as "the sanctity of marriage" begin to resound. And once the word "sanctity" pops into the dialogue, you know that you are outside the realm of civil rights and into the realm of religion.

I would like to suggest a radical solution to the semantic dilemma.

If the U.S. congress were to define marriage, not as the "union between" any particular numbers of persons of any gender, but as a "religious ritual" -- which is what is has always been, historically -- then all legislation about marriage would automatically be null and void as it would fall under the separation of church and state. I mean, congress doesn't legislate about baptism or extreme unction, let alone confession or excommunication. It can't.

This would mean than ONLY civil unions would qualify for whatever benefits they are qualified for by law. It would mean that institutions like plural marriage, same-sex marriage, and weddings in church and so on, could all take place under the aegis of whatever religion permitted such marriages, while having nothing whatever to do the kind of union that could provide the legal protections that should be provided couples of any sort.

Indeed, Miss California, in her foolishness, put her finger right on it, when she said "I'm not being politically correct, I'm being biblically correct." Precisely. And the U.S. constitution does not permit any legislation concerning biblical correctness. Therefore it can be argued that the constitution does not grant the congress, or the courts, the right to define "marriage" at all.

Of course there would have to be some kind of grandfather clause so that people married in church in the past could continue to receive the benefits of a civil union. But it's a solution which would eliminate a lot of needless debate and frustration, and CNN would have more time for real news....