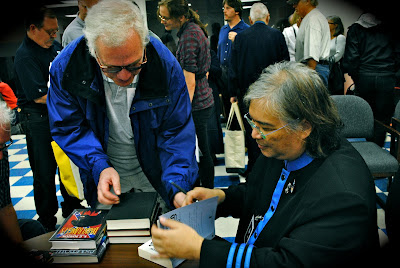 So ... I finally went back to California for a few days.  Nine years have gone by.  My old house, now taken over by my son Johnny, has been massively (and quite attractively) retrofitted as a kind of bachelor boarding house.  My godson Håkon's band Desecrate  has become famous.  Harry's diner hasn't moved from Burbank and still is one of the only "sleazy all-night diners" to serve a decent steak complete with pancakes.  Mostly, everyone's still there.  But we all know you can't step in the same river twice... 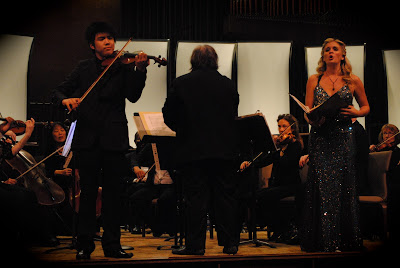 By a bizarre confluence of destinies the World Fantasy Convention took place in the same city and the same weekend that I was doing a concert in a gorgeous church in San Diego.   Meanwhile, producer David Giler asked me to meet my agent about possible movie deals for Vampire Junction and other long-ago classics.  I suddenly had all the pieces of my life fall into my lap at the same time.  In one week and within a hundred-mile range I conducted a symphony, autographed horror stories in a bookstore, breakfasted with publishers and lunched with agents, and generally had the sort of existence I should probably have had 20 years when I didn't have to drag my gout-ridden, corpulent corpus around with alternating bouts of excruciating pain and artistic ecstasy. 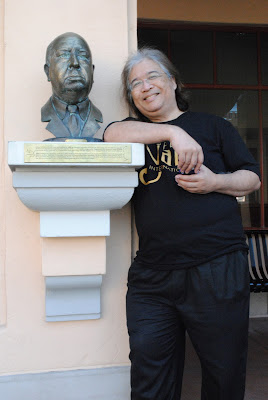 Dean Anderson, an enterprising and ambitious musician in Southern California, had set all this up by creating a plan to exchange artists between our two stables.  He had just done a concert with our Sinfonietta in Bangkok and my visit to California was the "exchange" part of the deal, with a young soloist from Thailand trading off against two young soloists from Orange County.  (Well, one Canadian and one Ukrainian, making it all very international.)  Our soloist was 16-year-old Top who's assistant principal of the Sinfonietta and who had never done a solo concerto before, doing Mozart No. 3 and as all real musicians know, Mozart is the easiest composer to play the right notes and the hardest composer to play the notes right.  So, it's a challenge.

In fact the opening concert was even more of a challenge than expected; Top's E string snapped in the first movement of the concerto prompting a dramatic game of swapping as he borrowed Dean Anderson's violin and Dean quickly switched violins with his assistant ... all without missing a beat ... and then during the excerpts from my opera "Mae Naak" I fell out of my chair.... all in all a wild return to the world of music in the USA (where I had not conducted since 1979.)  Despite all the mishaps we received four standing ovations so I guess the audience must have liked the show.

In the meantime I was staying at the World Fantasy Convention which was an odd thing; I gave a reading from an unfinished fantasy trilogy, walked around the dealer's room, lunched with many friends I haven't seen for years, and in general had a strange flashback to around the late 90s because these people were still the same, just a little grayer and a little fatter.  Still, had fruitful discussions about returning to the writing biz with people.  But I'm not sure about it.  I'm not sure about many things anymore.

I returned to a Bangkok that is slowly, inexorably coming under flood waters.  My house is still dry, but Top's is gone; he and his family are going off to the north somewhere.  I should probably escape as well, but there is so much to do here.  If they don't cut off our power, I'm happy not to leave my house for a couple of weeks ... so much to think about, to plan.
Posted by Somtow at 7:11 AM