A Fork in the Road - A Cockroach on the Lawn 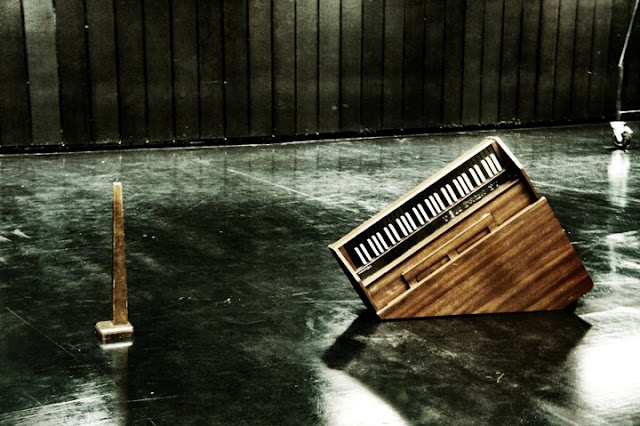 In this morning's dream, I am part of a big tourist expedition to parts unknown,  There is a fork in the road ... or rather, there are two pathways from the main road which will join up later on.  I take the first path and suddenly discover that I am alone; everyone else has decided to take the later branch.  But I soon reach my destination, which is a vast Cambodian temple ... it looks like Angkor Thom, except that it is weirdly lit, the huge divine stone faces glowing in an odd golden-yellow, as though they thenselves produced light.  But as I look at these incredible ruins I realize I am alone.  I need to find the others,

Eventually, I do.  They did not see any ruins.  They only want to get back home.  We are thousands of miles away from the city, however.  Eventually they cut across swampy ground, slashing tall grasses with machetes, to reach where I am.  Strangely enough, they do not really notice the temple.

I look back and say, "Civilization is nearer that you think."  Because behind the temple, where I came from, I see a road that is clearly Sukhumvit ... though a section perhaps far out from where I live.

If we go there, I tell them, we can get home.  But none of them follow.  I end up reaching the main road with only Top, the boy who went to California with me recently, and with Antoine, the tenor who got into undeserved trouble with the immigration authorities in London.

So we are standing there and I still hear their voices.  "You'll never get a taxi home."  But a taxi pulls up.  It's red and black and Top and I get in, and I tell the taxi to take me to Sukhumvit Soi 33, and then to take Top wherever he wants to go ... as I look back, I see that Antoine is still waiting ... he doesn't seem to notice that his ride has come and gone....

****
So I take a brief nap and wake up from another dream.  I am master of a huge estate with big fields and the whole place is infested with cockroaches.  I declare that there will be a cockroach hunt.  I send people out into the fields and they run along the open fields with beaters, making the cockroaches flee from their hiding places, then others of my gang spray them with DDT.

"This is amazing!" says a commentator.  "This will really bring in the tourists!  Call the ministry of tourism and put out some PR for the cockroach hunting season!"

Later on, I am trying to explain to two maids why the cockroach hunt is so beneficial.  But they do not understand me.  One of the maids, in particular is a bearded lady, whose sideburns make her resemble an ape.  She in particular has difficultly understanding me.

I bring them out to the fields to explain, but we discover that the cockroaches, in death, have turned into white jade, purest nephrite such as was once considered the noblest color of jade in China.

It seems that I am living in a not quite normal universe, made weird by this incredible jetlag which I simply cannot shake.  I walk up and down all night long and in the day I sleep at unpredictable hours, unable to do anything productive or to meet anyone.

A general malaise is in the air because no one knows how long the flood will last, or whether anyone, in government or otherwise, will actually do anything or know anything.  Though my street is still dry, the shortages in the grocery stores are bizarre.  There is, for example, no soda at Villa Market, and only the most upscale brands of water, but the foie gras section in frozen foods is just crammed.  We will know what side dish to have with your uncooked Mama noodles when the waters finally come to our street.

I do not remember dreams ... who does? ... but these are extraordinarily vivid and brightly colored, and despite their idiosyncratic qualities seem to actually be trying to tell me something.  The first dream tells me that the fabulous world of myth is but a stone's throw from the mundane path — could the others but see it — which they do not.

The cockroaches that turn to jade seem connected with the jade cicadas which for thousands of years in China were buried with the dead as symbols of rebirth (they have this very long cycle of dormancy and then appear to be born out of the earth itself so it is a natural symbol.)  I collect archaic jade so this seems to be a metaphor that my perfervid brain would automatically cook up.

People cannot fail to notice that I've been blogging every day for the past few days.  This is what insomia does....
Posted by Somtow at 5:39 AM