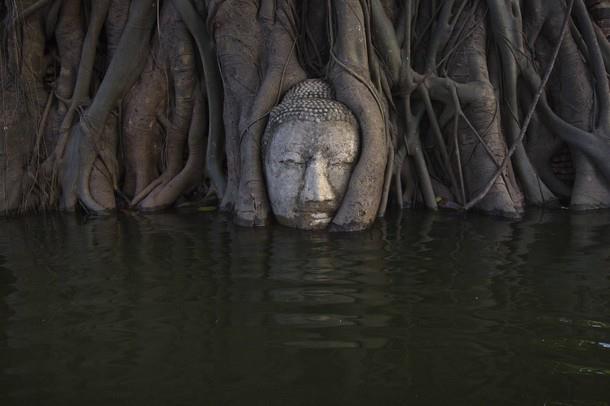 A picture is worth 1,000 words — but can it buy a few seats in parliament?

The above photo, from Reuters, of a Buddha image in the roots of a bodhi tree being swallowed up in the waters, is precisely the kind of image that can be exploited endlessly to shore up the bizarre theory I discussed in my recent blog — that the gods themselves are punishing the redshirts for an impious blood soaking ritual last year.  (By the way, I learned by brief googling that the Guardian of the UK quoted my blog extensively as a a major authority on blood spatter — making me the political equivalent of Dexter.)

Its validity as proof is probably about the same as a photograph once shown me by the father of one of my friends at Eton and Cambridge, Mark Watson.  The photo purported to show the footprint of a man and that of a dinosaur.  I gazed at it (it was blurry) and wondering why the old man was getting so worked up.   "If people coexisted with dinosaurs, what happened to them?" I asked him.

"What a silly question," he said, "they were all destroyed in the Flood, of course."  Later I learned that the Rev. Watson had written a number of books on the subject.  The Rev had a bit of an antediluvian fixation.  I did wonder why dinosaurs hadn't been allowed on the ark, but I guess they would have sunk it.

I haven't thought about Mark in many many years, but I recently found a pic of him, in the same book where I found that polaroid of myself at the age of 22. 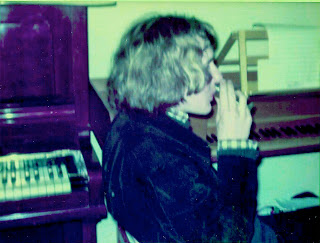 As a boy, Mark was as beautiful as a pre-Raphaelite angel.  I wonder where he is, and whether his father wrote any more books.
But to go back to the Reuters picture ... do you remember how I described the Buddha under the bodhi tree about to achieve enlightenment, and the earth goddess driving away evil with water from her hair?  Now the ones who subscribe to this theory will be shouting eureka, eureka as they crank up the machineries of political activism. 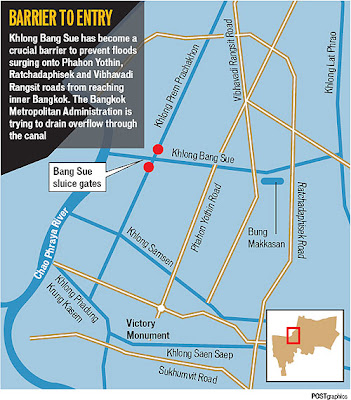 Still jetlagged out of my mind, I notice that it's almost 7 am and I should go to bed.  I check ismyhouseflooded.com and find the disquieting news that my neighborhood's flood percentage has gone up to 20%, the highest it's been in a while.   I check the Bangkok Post online and it tells me Bangkok will be "navigable in two weeks."
As long as the electricity remains, I will, too.   And as long as the Evian holds out, as the markets are all out of any cheaper water.
Posted by Somtow at 6:57 AM