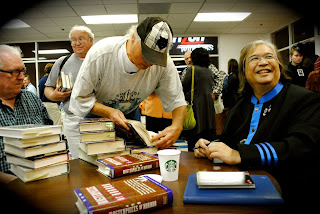 Well no, I am not on Sunset; this hotel instead abuts on Citywalk, which is a Hollywoodised vision of what an urban fantasy would be, located on the grounds of universal studios.

I've got an extraordinary dream to tell you about, weirder even than my life.  It's convoluted and recursive and brightly colored and it happened last night, causing me to wake up several times only to return to it.

This is how it began:

There is a gateway to another universe located in what looks like a box of kleenex.  I put my hand in and I am sucked in through a passageway that deposits me in that world with an odor of freshener or hand-washing gel still clinging to me.  Trisdee and Top have also come through this warp, but Trisdee now looks completely different, and I can see his real self lying in a corridor, asleep or unconscious in another plane of existence.  According to my dream, I am sharing the dream with those two people.

In this strange new world I am being harrassed by my nephew Pub, who is dressed somewhat like "The Joker" or another comic book villain.  Demoniacal laughter as he screams: "The secret formula of the universe!  I must have it now!  You will reveal it!"  and I steadfastly refuse and say I do not know.  Suddenly he claps his hands and four ninjas emerge from the dimensional kleenex box.  They fight me and eventually they shoot me in the stomach twice.  I collapse but feel no pain.  The comic book villain laughs and I say to him, "I am invulnerable!"

We escape down some stairs and are in a subterranean alley in an underground city, the walls painted with vivid cityscapes in turquoise and bright purple.  Top is behind me and in the distance, at the foot of another stairwell, a man is leaping in the air and speaking, sometimes rationally, sometimes using long incomprehensible words.

A professor suddenly appears to elucidate this, but first he asks me to translate the leaping man's words.  I say it is a dream, and that the language is full of puns.  The professor nods sagely and says, "James Joyce has a dream language too and often uses long words, portmanteau words such as dontcrossthelinesofhtestreetatall."  I immediately see a street sign with that word on it and know that I am still in the world of dreaming.   The professor obeys the sign, but has a wild silly walk so I realize he is not the voice of reason after all.

At that moment, Albert Einstein walks by and I call out "Alfred, Alfred," knowing full well that is not actually his name.

In my dream, I wake up and find myself trying to type up the dream on the computer.  It is only as I type that I recall the beginning of the dream, with the secret formula and the ninjas.  Trisdee stands over my shoulder correcting me, and telling me I am remembering the dream wrong and that I am leaving things out.  "Look here," he says, "you forget the words 'koax, koax' which are in your dream even though they are nonsense."

"What do you mean, nonsense?"  I say indignantly.  "It is a quote from Aristophanes."

Well, this is the dream I had a day after an exciting week in which I reappeared in the fantasy and science fiction community after a ten year absence, conducted in America for the first time since 1979, introduced a young soloist to an American audience, and promised several small presses that I would return to the book biz one day....

The Einstein figure might be key.  There is an Alfred Einstein, of course - he is he biographer of Mozart.  And there is an Albert - the patron saint, perhaps, of science fiction who stands at the gateway between the magical and the plausible.  It seems that I confuse the two.

As for the secret formula?  I don't know what it is but I do know that a lot of people are trying to get it from me in real life.

This is my last morning in California, and perhaps I'll write a blog soon about the incredible experiences I've had this past 10 days, in both the music and the literary universe....
Posted by Somtow at 11:27 PM