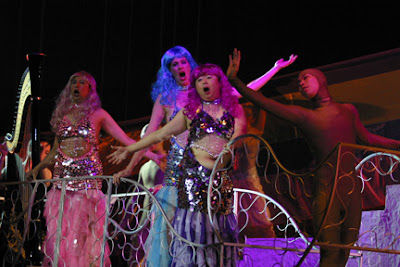 It's not as though I didn't have enough to do, but yesterday I was in a bit of a sonneteering mood, and I decided to add a few more sonnets to my growing volume of Sonnets about Serial Killers (due out as soon as there are enough to fill a book.) For example, I did a companion piece to a sonnet I wrote years ago about Susan Smith (the woman who drove her kids into a lake). This one is about Andrea Yates, who was told by angel of the lord to drown her five children in a bathtub. Do check it out (and some of the other new ones, too.) Years ago, some of them appeared in a rather brilliant Italian translation, and a couple have come out in Hebrew as well, but those I haven't seen.

And speaking of the Bates Motel, I've often wondered how Ed Gein, the notorious Wisconsin killer who killed women who looked like his mother, flayed them and wore little pieces of them, would have reacted to the various movie killers who in some way were inspired by him.

So I wrote this little sonnet about that:

Down here in Hell, they’ve got a movie theatre
And in my copious free time, I’m aghast
To see my weird existence rendered weirder
The further it retreats into the past.

Though I liked Psycho, I’ll give Hitchcock flack,
For I was sagging, plump, no Tony Perkins,
And he omitted my artistic bent, my knack
For slicing women’s privates into merkins.

When Texas Chainsaw Massacre came out,
Trophies there were of skin and flesh and bone
Reminding me of home. What made me pout?
They had a clan – I did it all alone!

And ho-hum Hannibal? I just ignored
That Oscar and that Golden Globe Award.


The above photo, incidentally, is not the entertainment at the Bates Motel, but a picture of the Rheinmaidens from last year's Ring Cycle (Part I). For, in between bouts of sonneteering and finishing this novel (of which I have 30 pages left to write, so it has to be handed in this week) I am now hard at work on the details of Part II. Indeed, today, Sunday, is not a day of rest as I've got a big production meeting in the morning....

I think I will leave you today with a clip from Das Rheingold. You will see the wild Colin Morris in Bangkok this year, but not as the evil Alberich; instead he will be playing the mild-mannered and sensitive Sharpless from Madama Butterfly.