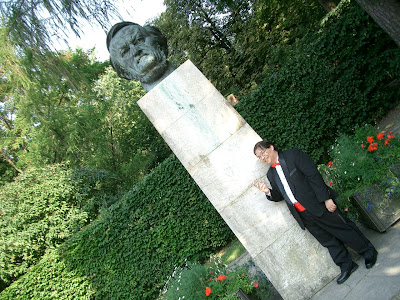 Saturday. Spent the night copying instrumental parts for the Renaissance event. Spent the morning thinking hard about the Walküre because those the movie that runs inside one's head must finally be converted into practical things. In one's head one can try out one combination after another; but we are often limited to inhabiting only one reality. It's rather sad, and large amounts of human energy are expended in imaging other realities, but all those realities, however remote, are eventually seen only through the lens of the one we live in.

Received an email from Babu, a very old friend of mine from the past, who recently resurfaced in my life. He's read this whole blog, or close to it ... I knew there was an audience out there somewhere! ... He knows that I'm a "storyteller" so he expresses some doubt that my bank account was actually reduced to 241 baht last week. Well, dramatic reversals are part of the deal in the world of the freelance artist -- that account suddenly jumped by 200,000% with the sudden arrival of some royalties, and a French tax refund! So, perhaps the corpse dream (q.v.) is actually coming true after all. Who knows? Of course, the dream was wrong about the lottery ticket, but only because it was upside down. If I'd known, I would have fallen asleep upside down!

Today, Sunday, should be a day of rest but for me has been a day of four major and variegated "operations". First a radio talk show to publicize the "Sacred and Profane" evenings the day after tomorrow. Then a working brunch with our newest committee member. Then a lengthy and exhausting but brilliantly effective rehearsal of our Mediaeval and Renaissance pieces ... and finally a gloriously decadent dinner at the home of the redoubtable M.L. Poomchai. During the course of the dinner, many scurrilous dark secrets were revealed about many of Thailand's most aristocratic families. I have to admit that I myself spilled a few beans I shouldn't have spilled. I'm afraid that a new book must surely be in the works, because it's clear that "Jasmine Nights" simply couldn't hold all the eccentricities of Thailand's self-named elite. It's been a day of tremendous artistic stimulation and Shavian witticisms. If I had too many days like this, I'd probably implode.

Dr Poonpit, at the Radio Show, told me an extremely exciting story; that during the reign of King Rama VI, an opera about King Taksin had been planned of which only sketches survive. Dr Poonpit has found those sketches and has strongly urged me to try to reconstruct the opera, which apprently went into rehearsal but failed to get all the way to a premiere....