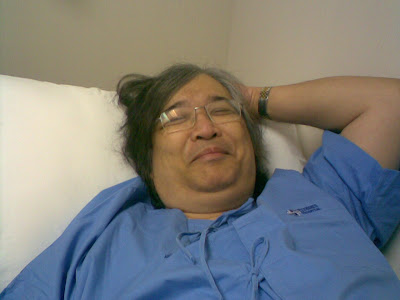 I didn't realize how terrifying "The Premature Burial" was until the doctors tried to give me an MRI. I was only in the machine for a minute when I began screaming! So, they said, don't worry. We'll knock you out. The nurse took the above photo as they were about to try for a second time. The "knock out" turned out to be about 10 mg of Valium, and as this is perhaps only 5% of the average Hollywood producer's daily recreational dosage, you can imagine what little effect it had, especially upon someone of my immense fatness.

After what I thought was hours (but which they assured me was only 10 minutes) a huge panic attack occurred.

I guess that if there's something wrong with my brain, they're not going to find out.

Meanwhile, the prognosis is quite encouraging. "Sure, it's life threatening" my doctor said, but he seemed very jolly about it. Then he added, "But don't worry, I'm going to cure you."

More when next I can sneak away.
Posted by Somtow at 9:44 PM