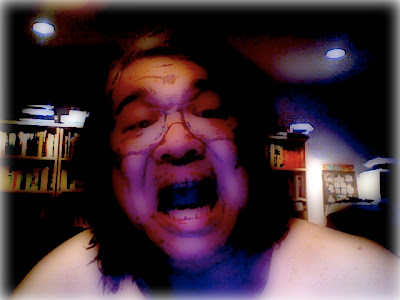 There was a time when people only had to wait a few months for the next S.P. Somtow novel or short story. My list of published books stands at around 50, but it's all between the years 1981 and 2001. Of course, to say that I have been blocked for the last seven years is not exactly accurate. I've composed three operas, a requiem, a couple of symphonies and so on. In fact, my friend Chaslin, the famous opera conductor and composer, pointed out that to have three full scale operas composed AND produced in about 5 years is pretty unusual; it may not, indeed, have happened since the days of Verdi and Donizetti and that crowd. On second thought, I bet it happened to Benjamin Britten.

However, the novelistic well did seem to have run dry, for a while, just as my composing well ran dry between the years 1982 and 1997 except for a few B movie soundtracks.

So I'm happy to announce that I have in fact now finished a long overdue novel, The Stone Buddha's Tears, commissioned in 2004 or thereabouts. It's a young adult book, it's set in Bangkok, and it contains some pretty radical social commentary which some may find a little controversial. Though it's not really about that, it's about the usual bullshit: friendship, love, relationships, the human condition, etc etc etc.

I think this means that the writing tap is ON again. As far as I know, however, the composing tap is not yet OFF. It remains to be seen how this will all balance out.

My next assignment is a short story I promised the internet magazine Aberrant Dreams. This story is just whizzing along, though, so if they happen to be checking this blog, I'll say, "Hold your horses!"

Also, I'm finally assembling the long-awaited "Sonnets about Serial Killers" ... and that leaves the last book of mine that's overdue, the even more long-awaited "Nirvana Express" the diary of my monkhood which was originally partially serialized in THE NATION. The publisher waited so long for this last one that I substituted another book, the short story collection "Dragon's Fin Soup." We were all hoping that Takashi Miike's movie of that story would be out soon ... they sent me the latest screenplay adaptation to look at ...

The next four days will be wildly preparing for the Renaissance Banquet on the 14th, ironing out some details about Wagner, and trying to make sense out of the fact that the writing spigot has suddenly come on again. It seems that dramatic changes are in store....
Posted by Somtow at 10:19 PM