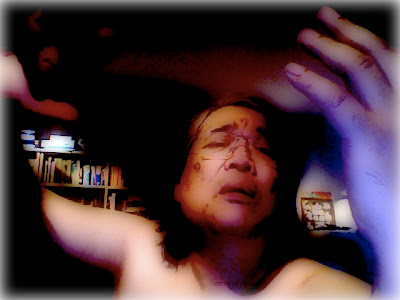 Well, the last 24 hours started hideously enough, with two friends caught in car crashes (luckily they turned out not to be too serious), word of further sneak attacks by the anti-Somtow consortium, and so on. In the morning, the tunics for the Renaissance concert singers turned up and they seemed to be about seven sizes too small; the only local dancers who could do the Pavane suddenly absconded; and there were rumors that various local ministries were going to renege on various implied promises. By noon, I had more or less decided to go back to America.

But in the evening we had a rehearsal of this concert and the Monteverdi was moving beyond words, the Byrd had me in tears, the recorder player ornamented brilliantly, the mediaeval harp sounded just right, and I started to think, once more, that it might be worth doing all this. Again, the idea of having this music heard for the first time in this distant land, hundreds of years after it was composed, and having people be profoundly moved by it, is so powerful that it can cause one to forget the trauma.

One rarely sees God, unless it is an acid flashback. But extremely profound music is one of the things that can trigger such an experience.

Last night I came home from the rehearsal and when I went to sleep the ravishing Dufay motet Vergene Bella kept playing again and again in my head. The words, by Petrarch, say "Love moves me to begin my prayer to thee, but without thee I cannot even begin." I dreamed that I was wandering in my own house (indeed, it did not seem like a dream.) I opened the door to my own bedroom to discover a sleeping child. At first I thought it was one of the young musicians who sometimes visits the house or one of Trisdee's friends. The room was filled with blinding light and the child was golden, and he said to me, "Don't be afraid; I'll always be with you." And when I looked into his face it was simultaneously very youthful and the face of an old man. I thought that this must be a ghost. And I was flooded with both terror and exhilaration (maybe the closest feeling I can think of is when you're coming down the first and tallest hill of a roller coaster, sitting in the front car, appearing to plummet into oblivion yet sure there will be a last minute rescue.) I woke up and couldn't get back to sleep and when I was still in the half-dreaming state, my inner voice said to me, "Well, actually, that was God." And I started to shiver.

I got up and answered email and so on, unable to go back to sleep for a very long time. My next dream was of an endless audition where I was casting both Wagner and Puccini, and dispensing roles to favored persons with impresario-ish magnanimity. This dream ended in a leg spasm of such excruciating pain that I could not walk for the entire morning.

What is this all about? Well, clearly, God has not forsaken me quite yet. But he is making me sweat pretty hard along the way.

This morning the intrepid Catherine Cushing tells me that, after her car crash, she resembles a unicorn. Well, wherever there are unicorns, magic is still real.

And there was certainly magic in tonight's concert. Dufay, Byrd, Landini and Monteverdi were heavenly and brought me to tears many times. The poetry is nice but I'm afraid some of it must be cut on Thursday to make way for dining and high society chit chat. Still, it will be an even nicer event and my sister and I tasted the food yesterday; it was superb, better even than the food that we had for Dido.

The dreams seem to come constantly now. It's obvious that there's a shift in the tectonic plates of my world. The last time I dreamed so frequently and with such metaphysical dream content was in the week before I was ordained as a Buddhist monk. That was in 2001, and when I emerged from monkhood I entered a period of wild creative ferment. Six months ago, post-Ayodhya, I entered a time of utmost darkness. This time appears to be coming to an end.

A person whom I love very deeply, but who has recently decided that I am the most evil person in the universe, has been emailing my friends to say that I need a shrink. He's right of course, but no one in their right mind would want to do what I want to do.