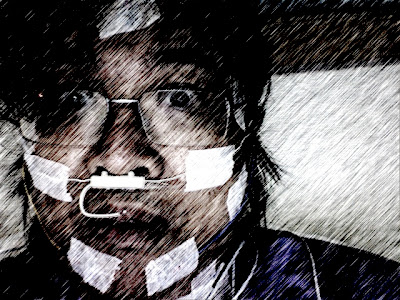 In response to many notes of concern which Catherine has forwarded to me and others which I've discovered on my computer today, I'm writing a note which you are free to forward to any others who might be wondering if I'm okay.

A certain writer who was at Cambridge with me, and became far more rich and famous than I ever will, once said "Don't Panic".

I would say that to you, but I would also have to point out that having dispensed this brilliant piece of advice in "The Hitchhiker's Guilde to the Galaxy," Douglas Adams subsequently dropped dead.

A fate I am now trying to avoid.

By now many of you have heard rumors so I am sending out this letter to all of you. Probably around the end of this week, I will be back home from the hospital, and I will be able to correspond by email in a limited sort of way, and to have visitors.

I have not had a heart attack (at least not recently), nor have I had a nervous breakdown. I have not been driven to a state of clinical depression by the spate of recent personal attacks and bizarre censorship scandals. What has happened to me *is* life-threatening, but I am assured that it can easily be taken care of if I only do what my doctors say I should do. So I want to say upfront that there is no reason to panic.

At the recent concert, "Sacred and Profane", many of my friends noticed that I was in a state of apparent near collapse. Some commented on it. Even some people who didn't know me personally thought that something might be wrong. After the admin meeting which was held at the Four Seasons after the concert, Catherine Cushing and Guy Pace had to actually sort of carry me to my car.

I checked into Piyavate Hospital and have been under the care of one of the best cardiologists in the country, a member of the royal family's medical team. The reason for the cardiologist is that, 18 months ago, around the time of "das Rheingold," some tests I had indicated that I might have suffered a minor heart attack, and my doctor told me to take a month off right then, or suffer the consequences later. I didn't do that and went on to have the most active year of my Bangkok career. "Later" has now arrived along with some of the consequences.

The good news is that, although at first this is what was feared, I did NOT in fact have a minor heart attack this time. And though there have been in the last six months symptoms that could have indicated a minor stroke, such as being unable to think of words and losing track of things, and some bizarre numbness that began in Holland in January, I do not appear to have had one of those either.

My medical problem is actually much simpler than all this.

You see, for my entire working life, I have been a night person, composing or writing from midnight to about 6 am each day, sleeping until the early afternoon, and taking care of business, shopping, etc. in the late afternoon and evening.

When I started running the Bangkok Opera, I started having to wake up at 8 or 9 am because there was all the administrative functions to perform, meetings to take, and so on. However, I didn't stop also working from midnight to 6. Since I also work on weekends, and have not taken a holiday in seven years, my basic problems in fact stem from a massive and chronic stress overload which is exacerbated by a sleep disorder. Even the few hours of sleep I get are constantly interrupted by sudden stoppages of the flow of oxygen, so that I'm always getting up disoriented all night long. The results from the sleep lab show that even with a full night's sleep, I never enter "Stage 4 sleep" at all, and that during REM sleep I often stop breathing completely with the result that I actually suffocate. So, there's a simple biological explanation for these wild metaphysical dreams I've been having about encounters with God, angels, dead people and so on … which certainly takes the romance out of it all. I think I'll prefer to believe there's a metaphysical aspect to these near-death moments.

Basically I've crammed about 14 years of activity into 7, and if I don't take the rest that the doctors told me to take 18 months ago NOW, I have been assured that I will, in fact, drop dead, or at the very least be out for 3 to 6 months instead of just one.

Certainly the hate emails, the financial stress of the opera, the censorship nonsense, the slanderous faxes to members of the royal family, and all the other rubbish that goes with musical politics in Thailand haven't helped, but alas, my many detractors can't really take the credit for causing this. I did it to myself. It wouldn't have happened if I'd stayed in L.A. And I would have to say that it was worth it. When I look back at everything I've helped to make happen in this country, all the careers I've helped to start (even of those who are trying desperately to pretend I don't exist!) I really don't mind that I'm paying for it physically right now.

At first, I was extremely dismayed at all this, especially since the debut of part two of our Ring Cycle is going to be delayed until November. But Catherine is of the opinion that she and my family didn't intervene a moment too late. Perhaps they are right. I finally have a moment, literally, to catch my breath.

I've probably got only about 20 years before death or Alzheimer's takes me, so I'd like to make sure that as much as possible of what I've planned for my life can actually happen. Establishing permanent, serious classical music institutions in Thailand that will still be around in a few centuries is part of my agenda. (Doing my own Ring cycle is a small and slightly self-indulgent part of this big picture.) Also, I have a few major works of fiction and music that I need to complete. Please bear with me while I step back for just 30 days to organize the rest of my productive life.

One result of this crisis is that I will not be running the opera 24 hours a day when I come back, not for seven more years, not even for another season. The inner board of the opera company is going to search for people to take over all the administrative and fundraising aspects of the company so that I can concentrate on being artistic director, which had always been the original plan. Although the opera season will probably expand when I come back thanks to -- at last -- government subsidy and a more stable fundraising base -- I will only conduct or direct a a small part of the season -- which was also always the original plan. This is because I also have to have to compose, write my novels, and work in film (several offers have come as my Hollywood colleagues have finally managed to track me down despite my having escaped L.A.)

The postponement of "Walküre" is in the grand scheme of things is not that huge an interruption in the season. With the extra time to get things right, I am sure it will be more satisfying. I'm excited that they are allowing me to keep "Butterfly" in August and that I'll be working with many trusted friends like Henry Akina, Nancy Yuen and Colin Morris. The good news is that, although it's driven me to illness, the last two months have seen an important upturn in our fortunes, with two government bodies finally interested in providing genuine financial support, a U.S. grantwriter coming on board, and so on, and it is now clear that the opera company, with or without me, will survive and do better than before.

I want to thank all of you for your letters and emails. There have been a lot, and I can't respond to them all right away, but I will try to. I'll be able to see people in the afternoons, starting next week, and I'm postponing the "Sacred and Profane" and "Dido" cast parties to around july 7 so that Trisdee can participate.

With love to all from
Somtow