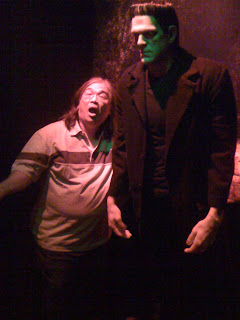 I had a very disturbing conversation with Trisdee a few days ago about quantum mechanics and spacetime.  Okay, these are not exactly subjects that impact our daily lives, but the conversation led to areas that definitely DO have such an impact.

It started when I asked Trisdee what the Thai for "spacetime" was, because I was trying to formulate a way of saying something in Thai about relating the musical structure of one of my compositions to relativity.  As some of you may know, we are planning a "science through music" camp for young people and I particularly want to discuss the relationship between music and relativity.

Trisdee couldn't tell me offhand so he searched around on Thai Wikipedia and came up with the word "kala awakash".  This is Sanskrit-based neologism.  "Kala" means time, and "Awakash" means space.  But wait a minute, I said to myself.  It means "space" all right, as in "outer space", because the roots of that word mean "without air" and therefore a "vacuum" and therefore the space that lies beyond our atmosphere.   There is absolutely nothing in the word that has anything to do with the meaning of the word "space" as used in "spacetime" ... i.e. space as in the three dimensions of space, space as in Euclidean geometry.

How weird, I said.  Whenever Thai kids learn about spacetime in physics, they automatically carry in their heads an image has has been engendered by mistranslation.  Whoever created the term looked up "space" in a Thai-English dictionary and didn't bother to penetrate any deeper into the semantics of it.

I started to wonder how many other Alice-in-Wonderland images young Thai students carry in their minds, so I asked Trisdee to look up "field theory."  You guessed it.  The world for "field" used in the Thai terminology is a word that evokes an elegantly manicured lawn.

There is a big issue at stake here.  The very first people to create physics textbooks in Thai, or any other textbooks that require wholesale creation of new terminologies, were either (a) not physicists and therefore not sensitive to the specialized usages of those words in English or (b) not good at English, and therefore content to believe the first Thai translation of each word out of context or (c) not good at English OR physics or (d) just mechanically slapping a one-for-one equivalency without being interested in English, physics, education, or anything except getting paid by the page.

However, because the Thai educational system emphasizes rote learning and extreme, nay idolatrous, worship of and obedience to one's teachers, no kid would ever raise his hand and ask, "Why does gravity come in lawns?"

I am not talking about the pernicious revisionism that permeates Thai school texts anyway (I once tried asking a dozen Thai kids who had won the second world war -- all of them thought Thailand had).  Shoring up one's national identity may require that history textbooks be written like a superhero comic, and no country is immune from that ... elementary history books in the U.S. are particularly nauseating in their cartoonification of the past ... I am prepared to admit that nations do mythologize their history and to some extent this is inevitable.

But we're not talking about history.  This is physics, i.e. hard science.  We're not even talking about the whimsical minds of physicists who have given quarks colors, strangeness, charm, and beauty.  We're talking about inappropriate translations of root concepts.

A day later I was talking to a German gentleman, Dr. Amrehn, who teaches at a Thai university.  He told me the problem is even more pervasive because when it comes to specialist vocabularies, each expert has created his own, and they spend as much time fighting over which word to use as over the subject in question.

Is it possible that there could be some kind of commission to completely rethink what is being taught here ... to find the best way to translate key ideas if needed ... to create textbooks that actually make objective sense?

Otherwise we're just going have another generation of rote-learning zombies, with all the external accoutrements of a technologically advanced society, but it'll only be skin deep.
Posted by Somtow at 1:21 PM