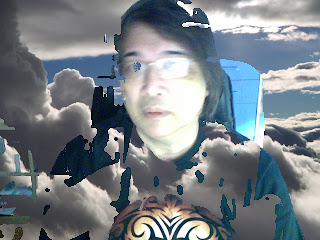 So I had a dream so extraordinary I must share it with you in its entirety.  In fact, I remember it all vividly hours later, suggesting that it is a visitation from the collective unconscious.

***
The dream is set in the future, in a vast crumbling mansion in which I live alone, in a large attic room.  The house is mostly dark, sculpted wood.  One day, there comes a visitor from the past (that is, a time traveller.)  I spend all day preparing a special room for him, but when he arrives I am so exhausted I am already asleep.

I come downstairs and he has been sleeping, he says, on a bench.  No, no, I must show you to your room.  I take him there.  It's a room that must once have been a covered entryway or hallway.  The French doors/windows have dark wooden shutters that do not reach all the way so that a bright sunlight comes in.  I apologize that I didn't put new mosquito netting in.  He might have been bitten.  My guest doesn't mind.

I open a drawer.  It contains jade knives (like from the ancient Chinese burial sites) but they're clearly fake because there is some Chinese inscription in old characters but also something written in English on each one.  They are pale green jade.


Other draws contain knives too.  And other cutlery.  I say ""The linen must have been kept here."  (Odd thing to say because there is no linen.)  I realize that this is no bedroom; it is an anteroom to the huge dining room full of antiques and a dim chandelier.  Then I say to the visitor: "You might think this is my house from 'Jasmine Nights' - the big mansion - but it's not.  This one is the ruined house."  It's a reference to the ruined house of dreams in my novel, Jasmine Nights.  He wants to know where the big house is and I saw it's outside.

We leave the house through the opposite side from the visitor's guest room.  We're in a vast green lawn.  The house must be that way, I say, because Sukhumvit is up here.  I point to the main road and see that it is completely walled off.  You cannot see the street.  We are cut off from the world.

The main house is not where I think it is.  Instead, there is a dark forest.  "If Sukhumvit is to the north," I say, then the house must be that way, beyond the forest."

The visitor cries out in fear.  We see that the way to Sukhumvit is guided by huge rocs ... giant, black, man-eating birds.  Each one stands guard, grim-faced.  They look like crows, but in the dream we call them rocs.  They may be ravens, but they are flightless.  Their red eyes glare.  There are also human guards.  Or perhaps robots.

There is no way to get out to the real world except through the forest.  So we set out to reach the main house, or perhaps the world itself.   But inside, the forest isn't made of wood at all, it is a concrete jungle.

First we pass a courtroom where someone is sitting in judgment.  The jury and court are like zombies.  They are just going through the motions.  It is a simulacrum of justice.  The visitor and I sneak past them and soon find ourselves in a labyrinthine mess of little cobblestoned streets.  There is no sky.  There has been no sky all the time; all this is inside something.

I reach a piazza lined with rococo columns, yellowing.  There is a stone pool or trough and in it, boys are swimming, naked, each one with a brightly colored toy.  The toys are the first brightly colored things in the dream.  They look like antique machines from an era of plastic.  They are all shouting, "These toys are for us to drown ourselves with!"  and they're gleefully submerging themselves.

"No, no," I tell them.  Quickly I take one of their toys.  "You've got it wrong.  These are ancient toys from a distant time.  They were not made for children to drown with."

I show the toy, hold it up.  It's a cone-shaped fluorescent green thing with little corkscrews dangling from it.  "These toys are not for drowning, but for flying."  And instantly, it takes to the air, fluttering in the first breeze to blow through these claustrophobic streets.  The boys cheer.  "You've forgotten so much," I tell them.  "Once, when we had a sky, a toy like this could fly oh, so, so high."

I turn to the stranger from the past, because now I suddenly know who he is.  And I am about to tell him so when I wake up.

***
I woke up from this dream six or seven hours ago, and jotted it down.  But until a few minutes ago, when I told the whole dream to Jay, I didn't realize that I was going to say to the stranger, "You're me."

And just now, I realized that although the plastic toys could touch the sky, the ravens were flightless.  Does this mean I shouldn't be afraid of death but I should trust invention?

This dream holds the clue, creatively, to what comes next in my life.  What's past is prologue, indeed, but also the rediscovery of flight, the confrontation with the Deathbird (there was a raven on the cover of my LP of Bernstein's Mahler 9, which I had as a child.) ... going through the forest of judgment, "forging" the sword of destiny (double meaning there because the jade knives were forgeries....)  I'll have to analyse it all the way to when I sleep again, and maybe revisit its world....
Posted by Somtow at 4:57 PM