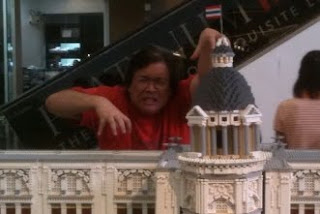 After just over two years of agony it is finally done.  So now I can talk about my Requiem Pro Matre Cantuum (for the mother of songs) at last.  Apart from the emotional strain of trying to create a worthy monument to one of the most important benefactors of classical music in this part of the world, there has also been an intellectual burden because in this composition I have tried to solve my personal conundrum, caused by my being caught between two worlds, two widely disparate ways of looking at the universe.

As some of you may know, I have been agonizing over the knotty question of the fusion between Thai and Western music for at least 35 years.  I've solved the problem in many different ways: in the 1970s by evolving a kind of textural polyphony, allowing the worlds to coexist without really blending, just sort of bleeding and cross-fading into one another.

In the 1980s, during my long escape into novel-writing, I formed a different view of where I should be as a composer.  It was a more Asian view because I longer believed in music as a linear progression from past through present to future.  I felt that the entirety of our musical past was physically present and there was no real need to feel connected only to the immediate past.  To be honest, this liberation came from writing music for low-budget films.  There was a freedom to experiment that I hadn't felt since being in Thailand in the late 1970s.

In the early 2000s, after returning to Thailand, I had reinvented myself as a neo-romantic.  Interestingly, many composers in Thailand, especially the academic ones who had not really actually had careers in the "real world" and who had essentially been cut off from many of the developments in the west, thought I had sold out, not realizing that the return to tonality was actually "more modern" than the post-serialism of the 70s.  But one of the things this enabled me to do was integrate melodic ideas from Thai traditional music more fully.  But eventually this wasn't enough and there was a need to use the underlying philosophies of Thai music as well.

There is a fundamental problem when we come to do this because western music is bound up in the western perception of time.  In western music, causality is therefore of the essence.  Music is about things that germinate into other things.  Ideas like development, recapitulation,  variation exist because time in western music linear.

In many kinds of Asian music, however, time is not perceived in the same way at all.  In the traditional "thao", as basic to Thai music as "sonata form" is to the classical period, the most developed, expanded variation is presented first, and then the music gradually collapses to its most rudimentary form.  In general, even in less extended formal structures, we must forget western notions that music proceeds by addition towards a climax and that each thing we hear has been built on that which went before.  We are into a more non-linear mode of temporal perception.  And the greatest performances of Thai classical music can generate a feeling of time standing absolutely still.

In my Requiem I wanted to explore all the different musical languages I've learned during my life including those I have long since abandoned, and try to find their commonality.  Thus there are movements founded completely on traditional Thai folk motifs, movements that pair serial technique with Monteverdi-like choral recitative, and movements that draw on the colors of science fiction and fantasy film music.  But the challenge was to draw these elements together into some kind of unity.

That is the reason that the composition of the last movement dragged on for almost eight months.  Of course, this movement need not have been written at all; but when I was speaking to Brother Martin about using the monumental ABAC church for this concert, and he said to me, "Don't forget the Libera Me."  This section is often left out of Requiems.  But then, the Libera Me - In Paradisum section of the requiem mass provides a wonderful progression from horror to sublimity, and it soon became clear that this massive movement could be used to bring all the disparate elements and forces of the requiem together.  The melodic element of in paradisum came to me months ago, as a simple Siamese folkloric theme that would not be out of place in an Isaan village.   I had already, in the Pie Jesu movement, used the idea that a short Thai motif that never modulated and simply repeated itself recursively without modulation could be a viable movement, and in the Sanctus I had explored the idea that I could freeze-frame a G major chord and (using western rather than Asian melodic ideas) pull it into an Asian timelessness.

What I needed was to integrate this into the whole.  In other words, to write a music that was both in time and out of it at the same time.  My solution was a childishly simple one, but one that I was in fact stuck on for many months.  It was to create a string of timeless "bits" in which the string itself was a temporal construct but the bits were not.  I found a way to have my cake and eat it too, in other words.

Whether it works or not will have to be decided by others....

But what is clear to me is that in the libera me I have managed to cathartically free myself from much of my own musical baggage ... from the post-serialism of my youth to the constraints of linear time.

I don't know whether this provides an entertaining glimpse into the compositional process or whether it's just a bunch of self-justifying B.S.   We will have to find out over time.