My Review of "Dances with Aliens" 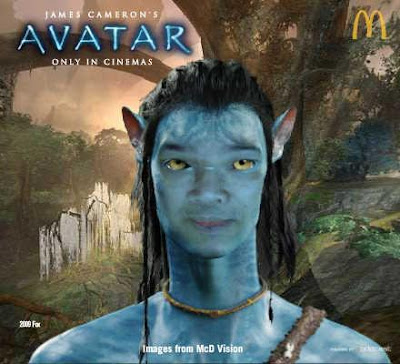 I wrote this review of AVATAR that appeared in THE NATION yesterday ...

"DANCES WITH ALIENS"
a personal perspective on "Avatar"
by S.P. Somtow

In 1977, Memorial Day, I sat with hundreds of salivating members of the Washington Science Fiction Association at the very first showing of STAR WARS. It was explosive. The packed theatre was alive. Every effect was greeted by applause and cheering. The world of nerdy sci-fi readers had suddenly become cool. The next decades were bittersweet as the masses began to infiltrate — some might say dilute — the purity of fandom's somewhat elitist vision of itself. But there is no doubt that STAR WARS' tropes — the Deathstar, "Use the Force", and so on — have become as entrenched in contemporary mythology as Achilles and Hector were to children of ancient times.

For almost 30 years, the science fiction community has been waiting for another such epiphany. Which AVATAR almost is. Its virtues as science fiction are considerable, its effects stunning and more than worth the price of admission. They are almost enough to drown out that little cynical inner voice that's bitching and moaning about the idiotic plot and stupefying dialogue.

No effort has been spared to make an alien world real. If you watch this film in 3-D, you will spend a lot of time being impressed. First of all, it's tasteful, not in-your-face, and the specs can be worn over your own glasses without any discomfort. The screen looks like a window out into a genuine universe. There's nothing contrived. There doesn't have to be, because the planet Pandora has been created with lavish and loving precision. It's a world that has been realized with such conviction and totality that you buy into it completely. It the film were a Galactic Geographic documentary, it would score a perfect ten.

Another example of the depth of detail in this film's world-building is the fact that the Navi language is so much a real language that I felt like pulling out a notepad and making grammatical notes. Some of my linguistic hunches were confirmed when I researched it onine later — it's a highly inflected language with a very fluid word-order, a rather limited set of phonemes, and fascinating grammar.

James Cameron has stated that the movie contains all the science fiction he ever read as a child, and that is easy to believe. Although the parallels with "Dances with Wolves" are obvious and, I believe, deliberate, the idea of a perfect Eden about to be wrecked by an uncomprehending, technology-inclined human race is one of the most important themes in science fiction. My first encounter with it as a child was in Theodore Sturgeon's classic novelette The Skills of Xanadu and James Blish's catholic take on the trope, A Case of Conscience, in which a priest reaches the conclusion that the utopian planet must be a creation of Satan because its inhabitants have no concept of original sin. Ursula le Guin's The Word for World is Forest is also an almost exact novelistic foreshadowing of this film. All these works and hundreds more are in AVATAR. There's probably even a nod to my own very tall, blue-skinned, sexy race of Selespridar in a series I wrote that was very popular in the 1980s.

It's therefore clear that Avatar has impeccable sources (one of which is not the famous science fiction novel The Avatar by Poul Anderson). My quarrel with the film is not with its sources — there really are no original stories per se — as with the fact that the sources are only half-digested, giving us a screenplay that insults the intelligence from time to time.

So in the end — yes, it's mindblowing all right. I will probably see Avatar several times in order to appreciate the complexity and beauty of its vision. But ultimately it's not the epiphany that the first STAR WARS was. In fact, it possesses the same problems that the second STAR WARS trilogy, impressive thought it looks, has. Like those three films, it's a film that treads old ground, more grandly and more spectacularly, and in travelling the safe way toward riches has given up some of the most important elements that made STAR WARS classic. The wit, for starters. STAR WARS was funny: AVATAR takes itself far, far too seriously. The character reversals: in AVATAR the lines of good and evil are drawn right from the start and never change. I was rather hoping that the nasty CEO running the planet would suddenly turn out to be a good guy, for instance, but all storytelling subtleties are sacrificed on the altar of special effects.

Having said all these things, which must be said in the interests of a fair critique, I'm still going to go back for another helping. As Obiwan Kenobi so trenchantly tells us, "Let go your conscious self!" You'll love it.
Posted by Somtow at 1:26 PM