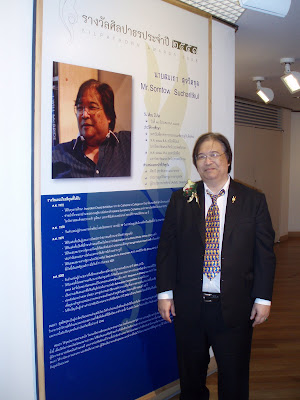 Well, this morning I woke to find that the rumors of the government calling it quits were untrue, and instead they've decided to tough it out. This is getting boring, and of course, scaring the tourists even more. While I'm hardly one to advocate yet another coup, this constant bickering is getting on my nerves. Indeed, the moral status of either side is getting murkier by the minute.

Of course, the main event today was my receiving this huge national award, the Silpathorn Kittikhun Award, at a dramatic ceremony not too far from the demonstrators. The Silpathorn award is for mid-life contemporary artists who have international achievements and so on, but, since I have reached the age of what Isaac Asimov used to refer to as "slightly over thirty", my winning that award was a little bit of a problem.

The solution was quite a typical one for Thailand; the committee voted six to one for me to win the award, so I couldn't un-win it; instead, they created a "higher award" -- the "Distinguished Silpathorn" Award, and gave it to three people including yours truly. Since this award can be given to such geriatric recipients as myself, it places itself in direct competition with the National Artist Award — and indeed, the director-general of the contemporary arts department specifically stated for the press that certain major artists are too "controversial" ever to be granted that honor by the old fuddy-duddies who run the show.

Am I a little worried about being the poster boy for a sort of "agenda" war within the ministry of culture itself? I guess so. But it's too late to worry about that now. And I can always sell the award. Unlike most awards I have received in the writing world, this award is intrinsically valuable: it contains 9 grams of 22k gold, a .15 ct emerald (maybe lab created) and .39 cts of vvs1 diamonds, E color! Plus, Princess Siriwanari, universally known as the "fashion princess", liked my tie!

The ceremony was a charming affair. It wasn't hugely high-profile, like the SEAWrite Awards, nor was it particularly tacky, and there was a huge exhibition set up of the award-winners which included excerpts from their works and so on. That was all pretty amusing. My mug shot of the day shows me in front of the Somtow exhibition.

One of the strangest things about the event though, was that there was a bizarre guy hawking Buddha amulets. He wore the elaborate uniform of a government civil servant, and he sidled up to me in the middle of the event, as I was standing in front of the Somtow exhibit, and he pressed four Buddha amulets into my hand. "Just look at these!" he said. "I want you to have them." I thought they were a gift from a fan or something (after all, this was a grand official occasion in which I was supposedly one of the guests of honour) so I thanked him, and then he asked me for 400 baht. I was so thrown by this I didn't know what to say, and I asked Trisdee if he happened to have 400 baht on him. He only had 300, but the guy said, "I'll take it" and slunk away.

He also tried to sell the Buddha images to Bird, the guitarist, who was just trying to take a leak, in the bathroom. However, Bird had a lot more presence of mind than I did.

That was, in a sense, the oddest thing about the whole ceremony....
Posted by Somtow at 2:40 AM