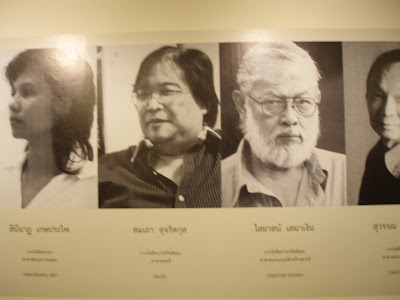 Welcome to day 7 or 8 of the so-called "State of Emergency" which, as I understand it, is being lifted soon for the official reason that "no one seemed to notice it."

At 2 pm, I was due to appear at a press conference about something other than politics. Chulalongkorn University Radio was promoting its new CD of music commemorate our beloved Princess Galyani Vadhana. I was surprised that the press was there, because at 2 pm, the court was also due to announce its verdict on whether our prime minister should be kicked out of office for the heinous crime of — gasp — cooking on television!

It was a lovely, beautifully organized press conference. Music was played; good coffee was served; VIPs came out and spoke movingly about the princess. I got a chance to discuss the requiem I am composing with the press.

It was a few hours later, when I returned home, that I learned that, according to the Christian Science Monitor, Samak had "cooked his own goose." Ah well. In a way, being ignominiously expelled from his post for daring to host a cooking show on TV is a face-saving mechanism, since he doesn't have to play chicken with the protesters....

What a country! One day I shall have to explain it all to my American friends, but that will not be today; tomorrow I have a big recording session, and I have to deal with the fact that a hard disk crash may have lost me the files of everything I have ever written or composed in the last twenty years.

In one of those huge pendulum swings of which my life seems endlessly to consist, a few hours after I wrote those words my hard drives were saved by applying the advice of my old friend Ryan from L.A. My worries about how to pay for the recording session of Trisdee's Eternity and my Pie Jesu were averted at the eleventh hour when friends pitched in. I might survive this annus horribilis after all....
Posted by Somtow at 10:43 AM