A Child's Eye View of the State of Emergency 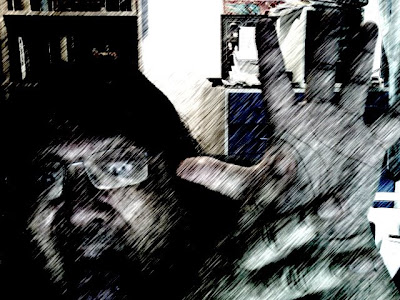 Well, as I said earlier this morning, I woke up to find the city in what was dramatically described as a state of emergency. I read on the internet that schools are all closed, so I looked in on Jay, but he wasn't in his bed.

It turns out that the schools may have been closed, but nobody bothered to tell them, so all the kids were in school anyway, by which time it was too late, so they just had school anyway. "Bummer," the kid tells me when he comes home from school. Tomorrow he was skipping anyway, because he has a violin competition, which, by the way, they also forgot to cancel.

So far at least, no one much seems to be aware that some huge political drama is going on. I've received an email warning from my embassy (I mean the U.S. one) telling me to exercise caution while going to the mall, but that seems to be about the size of it.

I'm afraid that scaring away the tourists is probably not the most effective way of dealing with this country's ills.

I read in the internet that party leader Banharn offered to mediate the crisis. He and I have the same dentist.

Tomorrow I am due to receive the singular honour of being made a Silpathorn Kittikhun, that is to say a "sort of national artist but not exactly." The award is being handed to me by a royal princess, and there will definitely be more than five people present: the media for one, plus ministers and high officials, plus all sorts of celebs.

If we are arrested for having more than five people at a meeting, it will be the most celeb-infested holding cell I have ever been in. (Well, all right, I actually have never been in a holding cell. Sorry. Not even in the Sixties.)
Posted by Somtow at 5:49 PM