Tinky Winky at the Televangelist's Tomb 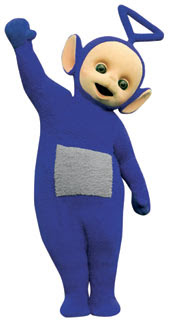 When Tinky Winky to the funeral went
He kissed th’ embalmed, rouged corpse upon each cheek.
Flexing his pink purse, by the bier he bent
And in limp-wristed googoo tones did speak:

“O, Jerry, Jerry, some have called you bigot
For outing me. And yet, to me, ‘tis fate;
Once on, one cannot just turn off the spigot
Whence flows oppression, scorn, distrust and hate.

You gave me too much credit. It’s their genes,
And not the influence of my vile skulduggery
Upon the minds of pre-pre-pre-pre-teens
That turns those British babies’ thoughts to buggery.

You’ve made a noble effort to forestall hell:
In life you soared — in death, you did not fall well.”

from S.P. Somtow's book in progress, Sonnets about Serial Killers, in which tabloid headlines become fodder for poetic license. More excerpts can be read at The Sonnet Project.
Posted by Somtow at 5:04 PM