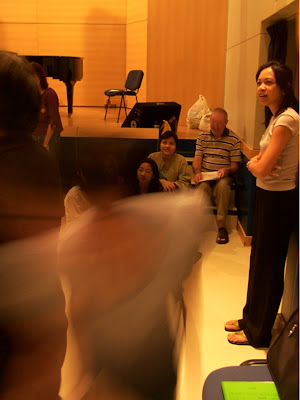 It's important to understand that in Thailand, when you dream of the dead, it means there's money coming. Seeing a dead person is the same. That's why there are lottery ticket vendors working the crowd at every funeral here.

I've just had a dream that was packed with the dead people and that presumably means my fortunes are about to change. It couldn't come too soon as I'm down to my last few shekels at the moment.

So, this dream begins at the world premiere of a Harry Potter movie. Johnny has bought me tickets for the best seats. I have the seat number: D 336. It's a huge theatre with giant corridors, red velvet everywhere, and box seats with adjoning VIP rooms. I wander down the lower orchestra stalls where I'm sure my seat is, but I find myself entering a side room with black armchairs where two ladies in 1950s pink suits are sitting, with those elegant hats they used to wear, rather noirish-looking; they're having their tea. A young one and an old one. So elegant. Now the important thing is that despite their fashionable clothes, they are also nuns. I don't know how I know this.

Well I get on my cell phone with Johnny and it seems I'm in the wrong place so I leave the room and look around and I discover I'm not in the theatre at all. I'm in an "ossuary train". That is what it's called in my dream. A train that transports dead people's bones and it's absolutely packed with them. I'm a little confused, I start to say goodbye to the ladies, but of course I am on the train too and it's pulling away, and I wake up realizing the train is on the way to the real Hogwarts ... that it's not a movie I'm seeing.

Well, the Bangkok Opera is about to split into two -- a money making part and a money-losing part -- a real world and a fantasy world. I suppose this is part of the meaning. The bones do suggest money to a Thai, even lots of money.

Or else it's some weird Freudian thing....

Now, the photograph above was taken at a rehearsal of the 2003 production of "Mae Naak". You will see something that many people claim is a ghost in this picture; some swear it is Mae Naak herself....
Posted by Somtow at 3:15 AM