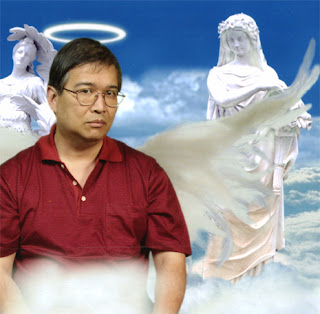 I decided to begin this blog after a week of epiphanies, disillusionments, and retrenchments. I don't intend to disguise any of my innermost thoughts, but perhaps, as of this moment, I won't name any names. Or I'll name some names and disguise others, for their own protection as much as for my own.

On Sunday at my uncle's cremation, I happened to mention to my mother that one of my many sworn detractors had obtained a 40 million baht grant for his orchestra (part of which he used to try to crush my orchestra). My mother said, "It's impossible for you ever to get that kind of money, because you're not evil."

I've always had a bit of a messiah complex about this whole Bangkok Opera thing. M.R. Sunida says that it's the pernicious influence of British public school and I can't easily escape that. But it became completely clear to me that sacrificing everything I own, living from hand to mouth in a way that my rich socialite friends can barely imagine, promoting the careers of dozens of young artists at the expense of my own, and putting lucrative career choices on hold have been all very well, but hasn't prevented me from being seen as arrogant, narcissistic, self-aggrandising and venal. And telling people the truth in the sincere hope that they will benefit from it has earned me many more enemies than lying to people would have.

What is the point of being Captain Vere when everything thinks you are Claggart? Conversely, is it not "better to rule in Hell than serve in Heaven?"

Sometimes I like to think of myself as the Roger Corman of opera. Why? Because Roger (whom I worked for on one picture) paid people virtually nothing yet gave major stars their first break, cobbled together productions from odds and ends yet at his best, he produced films that genuinely mean something, a real legacy. There is only one major difference between Roger and myself and that is that Roger always, while doing all these things, made money, lots of money. I on the other hand have lost everything I own.

So, in short, I have come to this conclusion; if half the world sees me as the Evil One anyway, why not try on the role for size? I have been spending the week discussing the options of how to become a proper "Evil One" with some of my closest friends and they're giving me very good advice on it.

I'll be reporting from time to time on the results of my quest. It is possible that my altruistic aims will ironically be achieved quicker if I go over to the Dark Side.
Posted by Somtow at 4:02 AM