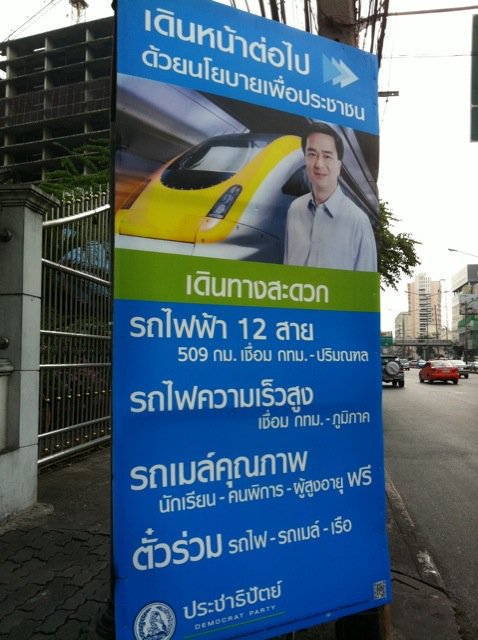 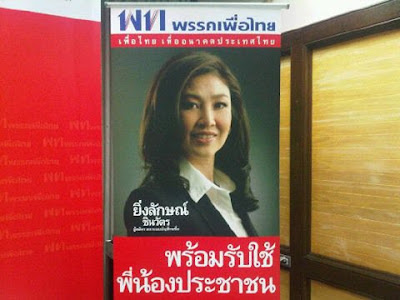 To help my foreign friends understand what's happening in this country, I'm going translate the salient parts of these two campaign posters.  I believe that the choices of image and slogans sum up the opposing sensibilities quite well.

YINGLUCK'S POSTER SAYS
... I am ready to serve my brothers and sisters of the people

ABHISIT'S IMAGE:
... a man riding a great big engine into the future.  No enigma here.

YINGLUCK'S IMAGE:
... a woman.  Your sister, your cousin.  The expression is ambiguous: smiling but a little smug.

There's a clear attempt to grab the populism agenda on both sides, and simultaneously a completely different approach to how to "do" populism.  The blue poster is about concrete things; the red one is about emotion alone.

Which direction are the two candidates looking in?  Although "right" is used in political parlance to symbolize conservatism, you will notice that Abhisit's body is turned to the left.  Yingluck's body language is leaning towards the right, but like Abihsit, she turns to face us, her potential voters.  I suspect that the directions that their bodies face hide a subtext.  In Abhisit's case it may be something like "You say I'm an elitist, but I'm more left than you think."  Yingluck's body, on the other hand, leans towards the right wing, as though populism could be a shield for autocracy - the very problem of which her brother has been accused.

Apart from their political connotations, left and right also have other meanings.  In graphology, for instance, a leftward slope tends to suggest a pull to the past, and right slant the future.  The arrow at the top of Abhisit's poster points rightward and the words speak of the future ... yet Abhisit stands in the other direction.  Could it be that they didn't have a trained image consultant who would immediately see that there might be a conflicting signal there?

Like the man himself, Abhisit's poster is thick with facts and figures to bolster his message.  Yingluck's is a Rorschach blot - you can see anything you want in it.  To appreciate Abhisit's poster, you must be able to read.  I believe that an illiterate person would, however, be able to get something out of Yingluck's.

Which approach will win?

One tends to think that vague and emotionally-charged slogans tend to carry the day, but to think that is often to underestimate people's intelligence.  So I suppose we shall simply have to see.
Posted by Somtow at 1:05 PM