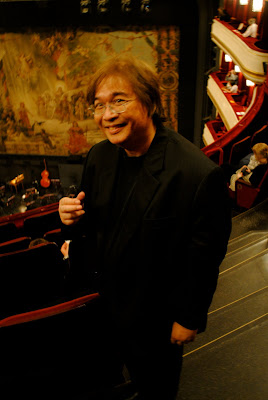 ... well my memory misserved me again, and of course the Volksoper wasn't where the Magic Flute was first performed ... I think that theatre is long gone. In fact, according to Wikipedia, it only existed for 14 years, yet was the site of the premieres of something like 300 works.

Still, seeing The Magic Flute in an ancient theatre is a thrill; the performance sits squarely in the middle of Magic Flutes I've seen throughout my life, from wonderful ones in Glyndebourne and the Met (the Chagall designed one where I saw Anna Moffo sing 40-odd years ago) to a really weird one in Hanoi.  Stylistically the orchestra is very up-to-date (if still middle-of-the-road compared to "authentic" period orchestras); the singing is uniformly acceptable and there are some striking moments: "Tamino mein, oh welch' ein Glück" in the second act, for instance.  The production is slick and unexciting.  I found myself missing our own eccentric Bangkok version with the three boys in a tuk-tuk and a festive Chinese dragon made of garbage.  For me, this is an opera that is always moving no matter what the production is, because you hear, in the background, a mélange of every other Flute you have ever experienced and deeper down still you hear a sort of idealised, perfect Flute that has probably never been.  I once saw a production of The Magic Flute with Guildhall students in Britain, in English, that ranks among the most moving events in my life, though technically it was less than perfect.

Times have changed: the Volkstheater audience accidentally applauded in the middle of the overture (would that have happened 30 years ago?) ... there is a Tibetan restaurant just outside the theater which I desperately wanted to sample, but alas no one in the party was interested.

So, after Zauberflöte what then?  Sunday.  In Central Europe, of course, everything is closed on Sunday ... and I mean everything.  But we caught many interesting snippets of life in Vienna.  For instance, dropping by the bit of church land where Mozart lodged briefly (and where we'd seen a somewhat hideous concert the previous night) we caught a church service in full swing.  I noticed on the wall of the front courtyard for the first time a plaque memorializing the German-speaking people kicked out of Brno (now in the Czech Republic) after the second world war.  (It made me think of Thailand and Cambodia, but that is perhaps for a different blog.)

Later in the day we ran into Anders Nyqvist, a prominent trumpet player here who plays in a contemporary music ensemble, has worked with such greats as Stockhausen (and told fascinating stories about Stockhausen raving deludedly about his birthplace on Sirius) and Ligeti.  Wants to come to Thailand to play a Ligeti trumpet concerto with our orchestra.  Should be exciting and bewildering at the same time.  Had a nice drink in a parklike setting outside part of the old palace, and some delicious duck.  Earlier that day we consumed Schnitzel at a local street cafe.  It wasn't as big as my head, but there were two of them on each plate. 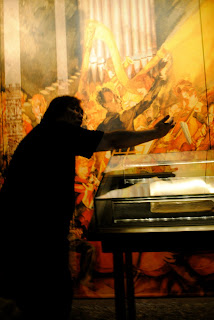 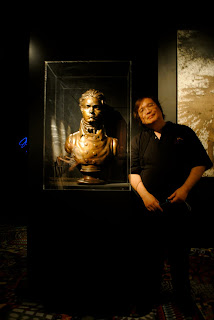 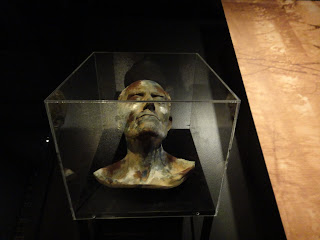 I also saw Mahler's death mask, and purchased a few batons at the museum of the Vienna Philharmonic.  (Famous conductors' batons were on dusplay as well ... I noted that Toscanini's had snapped.)  I needed batons badly as mine have all disappeared except for the precious one once owned by Leonard Bernstein, which I'm reluctant to use for just any old concert....
Posted by Somtow at 1:13 PM