It is a truth universally acknowledged that any one setting foot in the musical capital of the universe must at some point eat a slice of Sacher Torte at the Sacher Hotel Café.  So universally acknowledged is it, in fact, that 360,000 Sacher Tortes are sold each year by this hotel (so boasts their little blurb) making it a national industry almost on the level of, say, the marijuana industry in California. 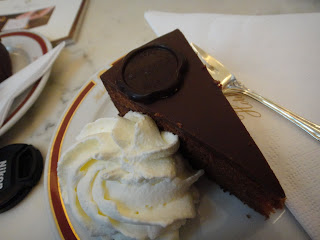 Thus it was that after making several agreements with our party to meet at the Café, none of which were kept, some of us did end up straggling down to the coffee house opposite the opera where we ordered "original" Sacher Torten and "big brown" coffees.  Taking pictures frantically, of course, like the oriental tourists we so clearly are.

The Sacher Torte in the Sacher Hotel has some kind of "secret recipe".  I don't want to seem sacrilegious, but the "fake" recipe serve by Bangkok's Oriental Hotel did not seem to pale by comparison.  Indeed, it might even have seemed a bit better to some.  There is a citrusy tang to the real Sacher Torte which to me is the main distinguishing feature.   And of course the enormous piles of whipped cream, which the Oriental Hotel does not serve up with their version of this cake.

We spent the day mostly failing to be tracked down by the paparazzi who had come to Vienna with us on the assignment of make a photo record of Somtow's musical journey in Central Europe.... 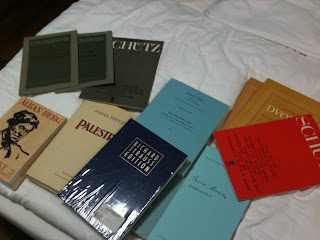 I forgot to mention rifling through the piles of used music at Doblinger, where I managed to find vocal scores in perfect condition of operas I've been looking for for a while, like Pfitzner's Palestrina and Gottfried von Einem's Dantons Tod as well as those gigantic old Fürstner editions of Strauss operas which I remember from my youth.  I  managed to spend about 800 Euros on music in a couple of visits, including some gifts like a vocal score of the Hummel B flat major mass (for Trisdee) and the Stravinsky violin concerto for Jay.  A nice new copy of the study score of Lulu and a new critical edition of Mahler 2 and a pile of mediaeval music thrown in as well.  This is a picture of the first batch of music I bought but I went back and picked up the Fürstner Strauss vocal scores and some Haydn masses.   It seems clear now that I will have to mail all the music back because it weighs a ton.

This afternoon Martin and Nikolai, friends of Trisdee and myself from the Haydn-Quartett, met us for coffee and Martin wisked Top off for a quick violin pep talk.  Then we set off for the Staatsoper where there was going to be a well-reviewed production of Verdi's Simon Boccanegra....
Posted by Somtow at 5:40 AM