Shaolin Monks versus the Amazon Fuzz 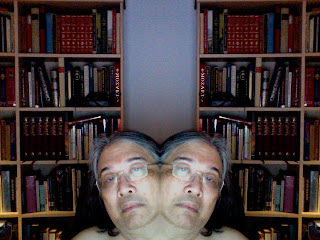 So it's the third day of the state of non-emergency.  The demonstrators raided a TV station and got their station turned back on (I think ... my satellite isn't showing it, but the news claims it is back on the air.)  The army demonstrated a profound grasp of Humane Crowd Control 101 by throwing canisters of tear gas into the wind, thus feeling their opponents' pain in a touchingly messiah-like fashion.

The crowd then rushed back to the Corner of the Five Shopping Malls and set up a human shield of monks so as to scare off the policewomen who were in the front line of the army's defense.   Buddhist monks may not, even accidentally, touch a female.  However, it is my understanding that Thai women don't really have to swear an oath not to touch a monk; the rule only applies in one direction.  Who, therefore, will flee whom?  Which impiety will be more gross?

I believe that the Voice of America's headline, "Thai troops use force to quell protests," is a typical example of how the west reinterprets the world according to its own history.  What actually seems to have happened is that the protesters forcefully broke through a police barricade to try to get the TV station to reconnect their channel.  Talk about hogging the remote!  The Thai troops did attempt to use force, but they haven't had quite the experience of beating up the lower classes as, say, the LAPD.  (Yes, in the old days of genuine fascism and real coups, the Thai army knew a thing or two about attacking defenseless peasants, but most of these guys weren't even born then.)  Naturally, they bungled it, throwing the tear gas against the wind and getting it all over themselves.  What a bunch of schlimazels!

I'll let you know as soon as the standoff ends.  It must get worse before it get's better.  To paraphrase John Wayne, "Never send a woman to do a monk's job."
Posted by Somtow at 11:11 PM