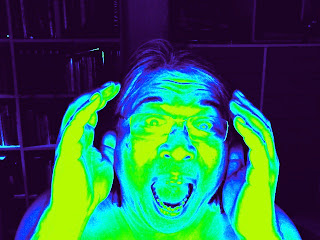 Yes, we're in the second day of a official State of Emergency, but I don't see any tanks, tear gas, M-16s, or much commotion at all, really.  Indeed I spent the day having a very pleasant visit with the folks at ASEAN TV, a new channel which is going to beamed into homes everywhere and on which we will, it seems, have some kind of weekly presence starting in about two weeks.

Let's talk democracy for a moment.  As I understand it, one of the most important principles of democracy is that when you lose, you wait your turn.  Now, I've been looking at a lot of figures and percentages published by various pollsters and newspapers, and what emerges is a picture very different from that promulgated by the red shirts or, for that matter, by some of the foreign press who are trying to make this look like Bastille Day.

Most polls show that about 20% of people asked want the red shirts' agenda: an immediate dissolution of Parliament.  40%-45%, however, want this government to stay in office till the very end of its term.  The rest are, as they say. "somewhere in between".  Today, the Bangkok Post published a rather more alarming poll: 60% of its respondents think the army should just disperse the demonstrators, and only 39% think they shouldn't.

This 20% is a very interesting figure because in the televised "peace talks", Dr. Weng made the following curious point: "If you have five children, and one of them cries for attention, naturally any parent would cater to the crying child's need above those of the others."  He made these remarks before the 20% figure was published, I think.

This is true, of course.  Anyone who has several kids knows that when one of them is crying, you might well temporarily relegate the others to the background while dealing with that kid's problem.  That is true, of course, but it's not democracy.  In an actual democracy, the kids would vote, and the crying one would be out of luck.

So, late tonight. Abhisit appears on TV to explain the non-state of non-emergency, and was he says is a masterpiece of subtle and complex reasoning, full of the sorts of things that make a politician a politician.  "I'm not planning to disperse the mob," he says, "merely move them somewhere else where they won't disrupt the daily life of the city."  He has learned from Bill Clinton how to say "that depends on what is is."  And he is right, of course.  The state of emergency gives him the legal cover to do whatever the hell he likes, and if he doesn't send in the marines, he will be lauded for his restraint; if he does, the average person in Bangkok will just be pleased that their access to Starbucks has been returned.

Tonight, at the corner 7-11, I saw four women in pink shirts.  "Oh, how nice," I said, "you must be members of the pro-peace party."  Somewhat horrified, the lady at the counter said, "No, we just like pink."

My friends in other countries keep emailing me to ask me whether I've been killed yet, but of course that isn't really how we do things in Thailand.  Nevertheless, there's a rumor out that we should all be careful after midnight.  Jay and I were having some late night Italian food near the main street corner and when we went to the supermarket we did see a lot of red shirts zooming by in their pickups, chanting slogans through megaphones.
Posted by Somtow at 1:32 AM