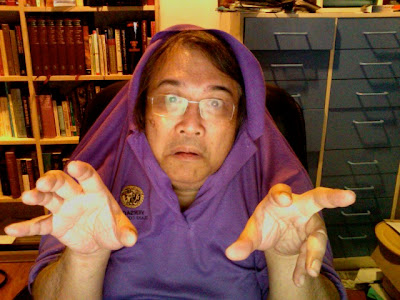 Ah, the revelation that shook the world, right up there with Watergate and President Clinton's disappearing cigar! And to think I was blithely sitting around composing operas when this epiphany seized the world's imagination! Well, although J.K. goes up in one's estimation for (a) the brilliant media savvy of dropping the right bombshell at the right time and (b) the nature of the bombshell itself ... I am a bit disappointed that this subtext was not made explicit enough for such unperspicacious literateurs as myself ... if *I* couldn't see it crystal-clearly ... there goes the chance of any sexually confused 11-year-old finding a decent role model....

Much of my news now comes through the distorting lens of Trisdee. He follows the news much more than I do these days. He told me not only about this, but about Mr. Ahmadinejad's dramatic announcement, also at some huge public do, also, paradoxically, in that fairyland we call New York, that there are no homosexuals in Iran. Makes you think, doesn't it? After all, the greatest glory of Persian literature is the ghazal, a kind of lyric love poetry from the mediaeval period, traditionally addressed to young men, especially cupbearers. (Oh, but there's no alcohol there either, I forgot.) These poems influenced the west: Goethe did a whole bunch of "remakes" in German, even retaining their sexually off-color content!

I know that Thomas Jefferson thought we should have a revolution every ten years, but I don't think he meant we had to sweep away all the great art and culture of the past! We can only learn from the past if we know what the past contains. Historical revisionism is always a disaster — for a country, for a society, and for the individual.

But, as I said in my last post, our self-appointed "advanced civilization" shouldn't be so smug. I read in some magazine that Ken Burns made his WWII documentary because he discovered that 90% of American kids he talked to thought the U.S. and Germany were allies in WWII against the Russians. I myself have asked a dozen kids here in Thailand if they knew whether Thailand won or lost the Second World War. None of them got the right answer.

But as for Dumbledore ... actually, it's a good thing J.K. didn't tell the reader, or the screenwriters, in advance. Especially the latter. They might have started writing in "stereotypical" behavior for our favorite wizard queen.

Now, here's the thing. At some stage, I'm going to have to give a speech in New York. Haven't done it for years; gave one at the Asia Society in the 1970s, gave a few talks at science fiction conventions, I think I even spoke at a CUSFS (the Columbia University Science Fiction Society) meeting once ... 25 years ago or more! But after Rowling and Ahmadinejad's dramatic pronouncements, what bombshell is there left to drop?

I know. I'll tell them I'm actually Jane Austen.
Posted by Somtow at 2:19 AM