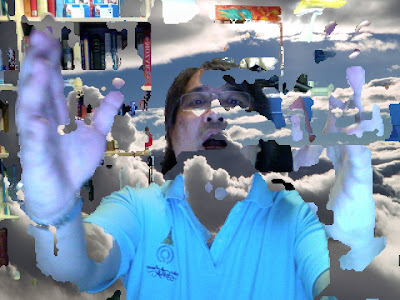 It was a depressing day, but answers came to me in a dream. Oddly enough, it was someone else's dream.

A long time ago (it seems) I met a young composer in the interval at a concert. He was 15. He told me wanted to write music "when he grew up". I half-jokingly said, "So what've you composed?" He then started to pull bits of manuscript paper out of hit backpack. One of them was "a Chopin-sort of polonaise, only I used an Isaan melody". It was because this kid knew virtually nothing at the stage, and yet had already learned how to be playful with what he knew, that I realized the extent of his creativity. I had a dream a few days later; I dreamed I was teaching Trisdee to fly.

Recently, I was in great despair over my whole existence, as I frequently have been lately: in some ways, artistically in particular, things have never looked better, yet the (as it were) forces of evil seem to be growing in viciousness, and the forces of coincidence even more vicious than the deliberately evil; and on Wednesday, I set myself a deadline. If a dramatic breakthrough didn't happen, I was going to make some life-altering decisions, such as going back to writing full time and chucking the opera, or even changing course more radically.

Partly it was because a government agency had agreed to give us a large grant, but the actual cheque was stuck in red tape for months, causing me to have to borrow money from my friends to subsidize the opera, and if the red tape was not unravelled, I was going to end up selling flowers on the street; partly it's the long term malaise brought on by thousands of disinformative spam attacks that were made against me months ago, by my the onset of serious apnea, etc. etc. And the fact that my opera salary is four years in arrears and that everything I might otherwise do to actually earn a living is on hold, etc etc. Well, there it is, the normal roller coaster of an artist's existence, but at its very nadir.

A day before the deadline, Trisdee had a dream and he bust into my office to tell me this. He said, "You were sitting in a hotel lobby with a man in a dark suit." Then he said, "You have been searching for a lost pin. A package came for you. I handed you the package it had a brooch in the shape of wings. also some other things, cloth."

I thought back to my own dream six years before and I understood that the gift of flight is being returned to me. I had in fact been sitting in the lobby of the Sheraton with a man in black only that afternoon, a British impresario who runs an operatic tour company. (Trisdee is too young to know that in the 1960s, unaccompanied minors on planes got to visit the cockpit and always received a brooch in the shape of wings as a memento from the captain. There's too much fear in the air now for such beautiful moments.)

On the very day of the deadline, the government agency sent me a piece of paper guaranteeing that they would write the opera the cheque. That isn't the cheque itself, but it is a major breakthrough in the bureaucratic labyrinth. Perhaps, having spent the last seven years here showing young people how to fly, I will be allowed to fly myself, again, before it is too late.
Posted by Somtow at 6:57 PM