Return of the Nightmares 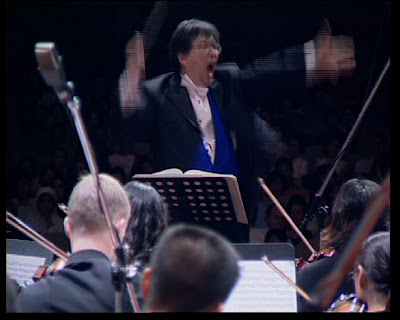 Another post-Butterfly day has passed. It's taking a while to return to normal after what seems according to most people to have been a major triumph. Last night, my breathing problems seem to have come back in a big way, and I woke up three times, each time with a different nightmare lingering in the memory. Two of these dreams involved science fiction personalities with whom I haven't spoken in a decade: in one of them, I was frantically editing a novella by Beth Meacham (who was actually my editor back in the 80s) while in another, Harlan Ellison was trying to force-feed me a Caesar salad that was covered in huge mounds of extremely dry garlic.

Although it is true that I am turning back to SF, having just rejoined the SFWA and having originally planned to go to the worldcon in Tokyo (it didn't work out because Butterfly simply wore me out) ... I don't know why these two science fictional eminences would suddenly appear in my dreams ...

The other nightmare is perhaps more comprehensible. I enter a wooden room. It's a house on stilts, a big rectangular room with a side entry to some kind of covered veranda or music room (this is I think, the exact same house as in my dream of 25 years ago about the woman in red and the ape, but more of that later). As in that previous dream, I have escaped from something and I'm hiding in the house. Carefully I seal off the veranda room and lock the front doors. The back is a sliding glass door, or a French door, that overlooks some kind of jungle or dense foliage sort of landscape. Ascertaining that I am perfectly safe, I sit back on the sofa. Suddenly, a huge, feather-headband-sporting native American bursts through the glass door -- which has never been closed at all -- brandishing a weapon which is a huge staff made of green sugar cane (or bamboo!) So, this creature chases me to the bed, wildly waving the sugar cane.

I fall back and I look up. This seems to be the bottom bunk of a double-bunker, one of those big wooden ones with a loft bed on top (or maybe the bottom is the sofa) ... but the thing is there is a big, shaggy brown teddy bear attached (maybe nailed) to the planks of the upper bunk, so it's hanging above me, and the teddy bear turns around and it's only got one eye (or one button where an eye should be...)

Is this scary or what?

Now this week, I have to turn my thoughts to my own physical survival, having let myself get torn apart a bit over the opera. But the odd thing is, I didn't really feel sick during the opera, even with occasionally conducting for nine hours. Maybe I don't really need to be attached to breathing machines ... I just need to be working on real creative stuff ... who knows?

However, there won't be much opera this month. For one thing, I've a soundtrack and a trilogy to write and for another, I am giving my first ever piano recital in my life since being thoroughly beaten by Jeremy Menuhin in a piano competition when I was 13. (His fingers moved so fast, they literally blurred.) What am I playing in the recital? The entire recital will consist of music by John Cage. Yes, I'm even playing the 4'33" of silence ... and I'm gonng play that piece from the music, so everyone will know I'm not cheating. I bought the score. It cost me $9.95 and consists entirely of the instructions....

More on this, and other matters, after I figure out why I can't get to sleep anymore....
Posted by Somtow at 12:06 PM