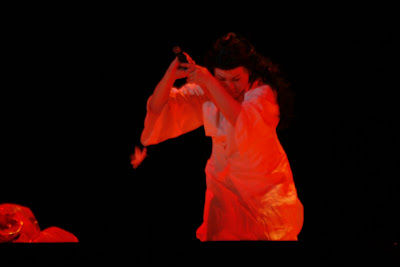 It's the day after the opening night of "Madama Butterfly" and I'm theoretically resting up between days (the next performance is tomorrow). Instead, I …

***
Okay, now it's the day after the last performance. You can see that I didn't actually rest up. When no blog appears for a while, it's because the day ran out of hours before I could get to the computer.

It will take some time for the dust to settle on this Butterfly but it must first be said that it was an unprecedented success. The cast outdid themselves, the orchestra more than made it through, and many people did heroic things ... for instance, chorus master Dominic supplying birdsong at the last minute, Meilan Henderson rushing to the rescue with a skirt for the leading lady, and so on. There was bitterness and laughter. And there was a sense that the Bangkok Opera, which has been through a lot of horror lately, from anonymous chain letters to bizarre censorship scandals through my illness and so on ... has in fact crossed a new threshold. The presence of the Minister of Science on the opening night and the Minister of Tourism and Sport on the closing night was quite exciting.

I think that Israel Lozano, our great new Spanish tenor discovery is already breaking Thai hearts. This is such a great cast that I already signed them for La Boheme next year. Only I don't have a date yet ...

Oh, so many stories. Take the wardrobe department. Colin Morris's trousers ... Henry Akina's shorts .... Nancy Yuen's skirt ... come to think of it, are all the stories about people's nether garments? Interesting.

Right now, I'm too tired to say much more. It's been exhilarating ... and indeed exasperating. In the end, pretty much everyone came through ... whew!