Dreaming with a Forked Tongue 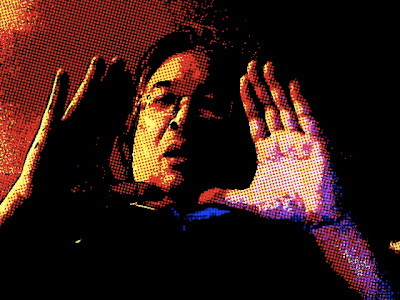 I'm in Singapore and I completely slept through the play I came to see. Not exactly the fault of Ivan Heng, my favorite Singapore director; it was not the play itself that put me to sleep, rather my own insane schedule and bizarre sleep deprived lifestyle. You see, in order to catch the early morning flight, I thought I'd just stay up an hour or two longer than usual, get to Singapore, take a brief nap then go to the theatre. The beds at the Hilton must be extra comfortable, because I didn't wake up until the play was over, and found a rude note from SISTIC (the Singaporean equivalent of Ticketmaster) informing me that I couldn't get my money back.

Well, the play is completely sold out (it's a Singaporean political satire) but, as it happens, I do know the director, so UNLESS I happen to fall asleep again, I think I shall get to see the play this evening....

But I digress. Having slept a lot, and at odd times, I have a peculiar dream to add to my dream diary. I woke up today from a very strange dream indeed. It was set in an idyllic country landscape, perhaps New England, lush, with lovely country roads. I was making a film or something because there was a set, but I had decided to take a little time off, and I was driving around. The roads formed a series of very big squares (almost as though they were created in a program like SIM CITY) and for some reason I decided to make a left turn that was earlier than my destination.

The reason is that I saw some Iroquois warriors standing by the road and I slowed down to look at them.

When I turned I was in an Indian village and a man with long hair, very much like someone you might run into in the Pine Ridge reservation in South Dakota, came up to my car. He wore a blue denim shirt and had a headband. He had a young daughter. He said to me that he was going to be my guide.

It was a village of thatched houses, more like some African kraal than a village in the plains states.

My guide began speaking to me in Lakota. I was surprised because I had thought this was going to be a Mohawk or Iroquois village (the warrior I had seen from the road was definitely NOT a Plains Indian.) I knew it was Lakota because I can understand a lot of Lakota words and though I didn't grasp the sentences, I could pick out words like "oyate kin" (the people) and "akichita" (warrior) and so on. The girl said, in English, "I will be your translator. He is going to show you around the village."

But the first house we come to is more like something in colonial Williamsburg or rural Pennsylvania. There's a regular concrete pavement next to it. I go in and see typical Americana: quiltwork, a dark wood rocking chair, and so on. The guide explains things and the girl translates.

I say to her (thinking on the Iroquois brave I saw earlier) "I didn't think you people were Lakota."

What does this tell me about my identity crisis? I wasn't English last time I looked. But, according to my mother, when I was two, I used to think I was English. I used to say to people in my piping little voice: "I'm English — you — foreigner!"