Notes From An Undisclosed Location 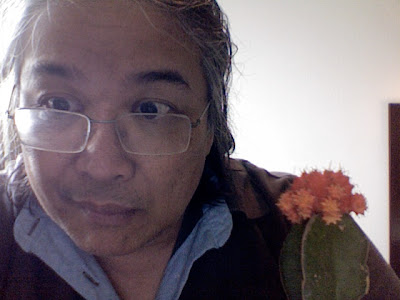 Well here I am in the old "undisclosed location". Let me reveal the truth; it's Shanghai. I've fled here to the friendly old Holiday Inn in order to be in my room writing and sleeping. And indeed, I did sleep, all day today. I have to confess that I have had my second dream within a short period that contains the following elements: (a) a mysterious number (b) Harry Potter (c) one or more of my kids, godchildren, their friends, etc. (d) a theatre (b) death. If you check the archives, you'll see a description of the last one under the title "Seeing Dead People." And as you know, dead people and numbers in dreams, for Thais, means a winning lottery ticket. What a pity the last one didn't quite work out....

Now that my doc has informed me that these dreams occur at times when my breathing stops during REM sleep and that the ominous spectre of death is actually sort of real, I'm a lot less concerned about winning the lottery! Therefore, I will simply give out the numbers here; others can buy the lottery tickets and presumably win. Luckily, there are no malpractice suits for prophesying winning numbers ....

In the dream, I have acquired a huge number of tickets to a Harry Potter opening. There are more tickets than actual seats, but I donate them to a whole busload of kids including my own, their friends, and so on. The theatre is on a high floor of a building and is reached by an M.C. Escher-like network of staircases (a bit like the tower in Hitchcok's Vertigo). Lots of people have tickets, but our bus arrives quickly and our group is hustled up to the very front of the queue. Suddenly, however, I have to go to the toilet, or write my novel (I'm not sure which) and I run off with my laptop to a shed that could be an outhouse. I an sitting on a huge gray boulder with my laptop, writing away (or is it shitting?) when I realize I might miss the opening, so I run back to the big mass of interlocking staircases where I am now standing at the end of the line with the Headmaster of the Bangkok Patana School, who appears to be Andy Homden with a dash of Paul Beresford-Hill. They start counting off the available seats and they reach 601 (or 801). There is one left, and there's me and the headmaster. The headmaster says, no, no, you go. After all, you gave us the tickets. Just tell me one thing: Does he live or die? At the last minute, I decide to sacrifice my place in the line. I yell up the steps for someone named Bryan to drive my kid home later, and I get in my SUV and drive home alone....

The stairway might perhaps be the stairway to heaven, and my self-sacrifice seems to be yet another last-minute reprieve from death....

What little I have seen of Shanghai from the hotel window reminds me of the planet Trantor in Isaac Asimov's Foundation series (of which the world of Coruscant in the Star Wars movies seems to be a very accurate rendition.)

Now, my excuse for coming here is that my old friend Hsu Po-Yun has invited me to the opening of the French musical "Le Petit Prince", so it is an excuse to see the splendid new theatre and concert hall here. Which is also quite science fictional in appearance. Inside, the walls seem to be composed of giant cocktail wieners. The concert hall is staggering, the opera house a little less so. The place is absolutely crammed and I realize that in Shanghai the people comingt to these classical music events act as though they're coming to a pop concert; and that's a level of enthusiasm we're missing in Bangkok.

Elsewhere there are many signs that the audience is relatively new to all this; people keep pouring in long after the show has started, chattering at he tops of their voices, and cell phones go off constantly. But there is no denying the sense of excitement that radiates from this audience.

The play itself? Well, I can't say I adore the music, and I don't think that Le Petit Prince can ever be played effectively by a grown woman. If you think of the huge effort the BBC put into finding the right little boy to play the stunning Rachel Portman operatic adaptation, which was quite brilliant, I don't see why a musical could merit any less of an effort. The world has changed and it's a lot harder to buy this particular illusion. However, the production value and effects were startling, the lighting was beautiful and the production clearly expensive.

I felt really tired afterwards, though, and had to run back to the hotel to sleep, avoiding all the partying, etc. that is normally required of visiting intendants.

Well, tomorrow I shall return to Bangkok and to the search for the perfect non-malfunctioning breathing machine.
Posted by Somtow at 12:53 PM