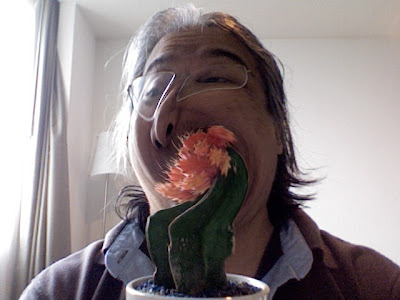 In Limbo? What does that mean exactly?

It means I'm vaguely ill all the time, but I think I shouldn't be, and act like I'm not, so people continually expect me to do the same things I've always done, which stretches out the length of time it takes to recover....

Meanwhile, we're having very fruitful days, in some ways. The Butterfly production is cast ... I mean the comprimario roles, because we always had the larger roles cast ... and a lot of interesting people are making their solo debuts with us. For instance, Bangkok's well known "singing policeman" is making his Bangkok Opera debut in the role of Yamadori; it's a good role for him. The office was a-bustle with production and excitement and it felt almost like old times. And at the chorus rehearsal on Thursday, many gorgeous sounds were elicited from the chorus, especially the women.

After we didn't hear back from Yun Deng, the Met's Suzuki for many years, I contacted my dear friend Grace Echauri, upon which Yun Deng managed to resurface on the immense ocean of the internet. Either way this would be a dream cast for Madama Butterfly, and so it's all very exciting.

I've been waiting with bated breath to see what my agent thinks of my new trilogy. To my delight and relief she seems to think it's good enough to ship out to several major houses this week, so it's possible that my career in the fantasy world is about to be relaunched; that would certainly be a thrill. At the same time, I also do appear to be working on two very different movie soundtracks from Hollywood, and the two films could not be more different from each other. Creatively there is a sense of great renewal here, despite some hideous bouts of sleeplessness and a feeling of mounting dread.

The latter, of course, comes from the knowledge that this idyllic period of inner renewal is about to end and I'm about to be thrust once more into the dog-eat-dog arena that is Thailand's classical music scene. I know I haven't fully obeyed my doctors, but I don't see what else I can do at this point. And I HAVE lost weight; this morning I was down to 98.4 kg, still at least 20 too much, but it does mean I have lost close to 10 lbs over the last few months. (If I use kg for the weight itself, and lbs for the weight loss, the numbers seem far more encouraging.)

I haven't had an "apocalyptic dream" in a week. No encounters with Ganesha, holy children, or anything like that. So I *am* getting better. Once I get a breathing machine that doesn't frighten me, I'll probably be getting better a lot faster.

Is my newfound creativity going to doom the opera company? I continue to hope that, with the delegation of most of the opera's functions, I will be able to coexist with myself in the long run.
Posted by Somtow at 11:46 AM