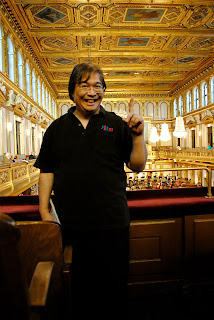 I haven't blogged for a month but it's not out of laziness; there's endless rehearsals, concerts, operas, and lengthy admin meetings and by the time I get home each night I am a zombie, a condition assuages only by sleep and the odd Zynga game.

In a few weeks, our entire team of somewhere around 75 people goes to England.  There are a lot of things to prepare in order to perform Mae Naak in London, from orchestra rehearsals to placating the spirits.  One of the most noticeable things about how we do things in Thailand is chaos, but it's not really chaos.  It's actually heterophony.

Heterophony is the organizing principle of classical Thai music and it involves everyone in an orchestra simultaneously improvising on the same melody.  Each person does his own thing and the melody somehow emerges even though everyone appears to be going in a different direction.  It's the secret of how things seem to work in this country when they simultaneously appear not to be working.

So, we are in chaos now and yet the pattern is beginning to emerge.

Meanwhile, I was invited to a cybergeeks' panel.  One can in fact watch the entire thing in youtube I understand.  Here's the beginning of the ten-part series.

One of the oddest things about this was to compare it to a panel at a science fiction convention.  Of course in my previous incarnation as an SF writer I did so many of those that I developed certain skills to a degree, but I've never had to do it in Thai before.  And there was one very different thing about it.  Although this panel (which was webcast) was about "the future", the panelists by and large, and the audience in particular, didn't seem much interested in what I think of as "the future" ... 10, 50, 100, 1000 years from now.  They wanted to know what the next Intel chip was going to be like (and the CEO of Intel Thailand was there to tell them.)

Issues that form the meat of such panels at any regional SF convention, like the social consequences of virtual reality, didn't really hold their interest that much.   Had the panel consisted of the likes of Gardner Dozois, it would have been a lot wilder.

And yet this did make me reflect on a far-reaching implication.  Is it possible that young people here are simply not encouraged to extrapolate?  The idea of extrapolation, familiar to every science fiction fan, is about taking one element, often a small one, and going as far as you can with it in a huge leap into the chaotic hyperspace that is imagination.  Much crap is conceived by extrapolation, but it is also the birthplace of most of the important ideas that have driven civilization forward.

I've met a lot of young people here in the course of our work in music and also in our "Bach to the future" series of science and music camps where some of the most talented kids from divergent intellectual worlds are thrown together to see what sparks will fly.  So I know that this country does not suffer from any lack of brilliant, creative individuals.  There's also an abundance of self-help books around Bangkok bookstores about how to "turn your child into a genius." However there don't seem to be that many books on "how to teach your child to think."

I'd say that this actually should be the biggest item on the national agenda.  A complete overhaul of education towards an emphasis on "how to think" would improve the country in countless ways - including putting an halt to the various partisan "mobs" of all colors that invade Bangkok from time to time.  How could changing the educational system end political strife?  You'd have to extrapolate to find out.
Posted by Somtow at 10:42 AM