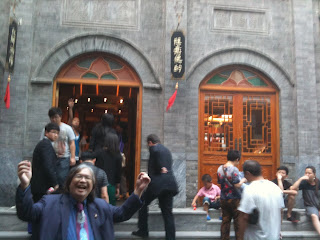 So, last week I found myself in Beijing, as a guest of the Chinese ministry of culture, representing the Bangkok Opera at an international summit which featured all sorts of Big Names ... the Deutsche Opera Berlin, La Fenice, Opera Australia, den Norske Opera and so on ... celebrities like Lorin Maazel ... a big production of Traviata in a huge architectural phantasmagoria of an opera house ... and so on.
I wanted to do a day by day blog about it from Beijing, but to my amazement I discovered that blogger was blocked in China, as were Twitter, Facebook, and Youtube.  So China was truly another universe.  It was in a sense like a three-day mission to Mars.  Yet it was an alien world that had many points in common with my own world.  And shared many of our hopes, fears, dreams, and ambitions.  Despite many differences, I felt welcomed and very much at home, and left China with a powerful feeling of wanting to help, and to accept their help.   Clearly, our strengths and weaknesses complement each other well.
The Chinese have built an incredible cultural center and are investing enormous amounts of money into creating an internationally viable opera.  Thailand, on the other hand, has an ageing cultural center and have invested very little money in creating an opera company ... yet its opera company has a surprising amount of international traction, with real coverage in Opera, Opera News, the New York Times, and all those "real" media.  It does seem that we have things we can offer each other, and by the end of the conference we were figuring out what those things might be.

So, from a wild opening ceremony where Lorin Maazel gave a speech blasting Regietheater to a closing dinner featuring duck done a dozen ways, from stuffy panels to deals in hotel bars, there's a lot to tell about those three days in China.  But now that I have almost daily rehearsals for our forthcoming kids' concert this Sunday, I can only blog in bits and pieces, so I'll have to tell more tomorrow....
Posted by Somtow at 11:57 PM