Back from the Radio Station 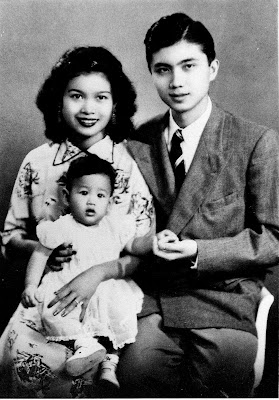 ... and already have one email from one Jo Cadilhon, a tenor in the opera chorus who seems to have enjoyed the show. In advertising they say that one response equals 1000 people, so I'm assuming this is a decent approval rating.

However, I have to say that running a talk radio show in Bangkok is pretty weird. For one thing, being witty, urbane, and being able to use sesquipedalian vocabulary isn't something that comes entirely naturally to me in Thai. For another, whenever I did any talk radio in the States, it would actually go on air at the advertised time. In Thailand, however, they tell you when you arrive, "Oh, it'll be a half hour or so," and rather than telling you that your show will end at ten pm, they say, "Oh, just go on as long as you want." This whole laid-back attitude made it very easy to work there, and Mr. Aw, a seasoned talk show personality, was appointed to keep the thing moving and to fill up any dead space if I ever forgot some simple Thai word.

So, there were a few amusing gaffes — I hadn't realized, for instance, that every hour on the hour, the show automatically cuts to the news. In the middle of a long concerto movement, I suddenly realized that Trisdee's pianistic flourishes would soon be interrupted by a blaring disco beat with the latest stock market figures, serial killers, and political movements. In despair, I pleaded my case in the control room. And guess what they said? "The news is pretty boring right now, it's just Thaksin or something; we'll just skip it."

What a grand feeling of power, to know that one's musical whims could overrule, if but for an hour, the public's Need To Know about the latest political scandal!

Well, I managed to play MOST of the music I had pcked out for the show despite rambling too much and being interrupted by commercials. It was a hilarious bag of eclectica, including music by Nusrat Fateh Ali Khan as well as Alessandro Striggio, Prokofiev and my humble self. Pontification was fun! I think I will hold off on allowing call-ins ... for a while longer ... until I have become a little more confident....

I've come home and while randomly surfing the web discovered that a story of mine, Little Red Caplets from the online magazine Aberrant Dreams, has made StorySouth's "notable stories of 2007". It's a story which sat on a hard drive for seven years, unsent to any publisher. Maybe I won't give up writing quite yet.

As for the above photograph, no prizes for identifying which of the three persons depicted is the author of this blog.
Posted by Somtow at 11:19 PM