Requiem for the Mother of Songs 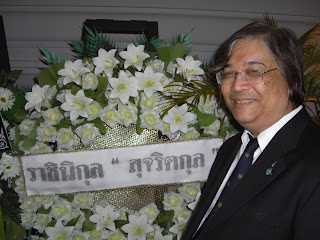 After three years I finally completed work on my REQUIEM FOR THE MOTHER OF SONGS, written in memory of HRH Princess Princess Galyani Vadhana, and yesterday the Department of Cultural Promotions at the Ministry of Culture agreed to co-host the world premiere at the Thailand Cultural Center. This work requires over 400 performers, is about 75 minutes long and is I believe the first setting of an entire Latin liturgy by a Thai composer; it's probably also one of the biggest concert works composed by a Thai in scale and length. However I hope it will be appreciated for its moments of inner stillness and intimacy as well as its huge gestures. I'm working now to cast the seven soloists. Festa Musicale in the Czech Republic is contributing over 100 choristers to join the vocal forces in Thailand. I'll soon be sending out a letter to choirs and university music departments to ask for their cooperation.

I thought the work would be done in time for a memorial event shortly after Her Royal Highness's passing, but the piece grew and grew and became a compendium of my life's work, using all of the techniques I learned over the 50 years in which I've been composing and performing my work. It also attempts to find solutions to the central riddle of my cultural identity by forging a link between the Thai and western sensibilities. So for the first time I'm integrating my post-serial past, my post-romantic present, and my roots in Southeast Asian musical dialectic.

I hope that putting together this production, which will be a climactic moment in my life's journey, will also be a path toward conciliation and a way in which many disparate elements of our musical communities can come together.

Since the princess passed away, there has been a kind of strange darkness in our music communities — people unable to find their way, arguing over trivialities. I hope with this work to find the doorway in the labyrinth, to help us find our collective way back to the light.

My Requiem has been the subject of rumor (and even attempts to hijack it by slapping together other requiems) for many years. But now the score is a physical reality and a vocal score will soon be available for downloading.

I hope my friends will all join with me to make this tribute to HRH Princess Galyani an event to remember.