My Birthday Address to the World 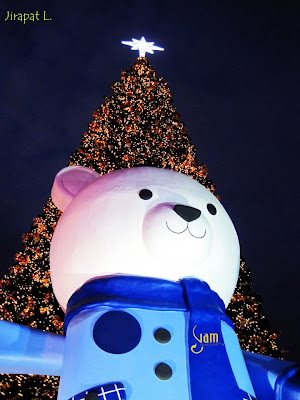 Today will mark my 30th year as a 29-year-old.  Next year, I will probably drop the pretense of youth completely; five cycles is a momentous time in the Buddhist world view, and perhaps will finally be the time to grow up.

This birthday is in some ways a low point in my existence, in others a definite perihelion.

The low points: for all intents and purposes, I'm bankrupt.  The opera, which has been at the heart of my struggle for culture in the region, has been bled dry.  Opportunity seekers have flatlined the golden goose, and artists who owe their careers to what we did for them are hemorrhaging away.  I begin the 60th year of my existence much as I began when I came back to Thailand ten years ago ... empty-handed.

For the first time in decades, my Christmas tree stands covered with lights and mementoes from friends living and dead ... and without a single present at its base, because no one has had time to buy any, or money for that matter.  We've all been too busy battling various incarnations of darkness.  Indeed I've officially announced that my household will delay Christmas to Epiphany, the last day of Christmas, January 6 ... perhaps it's even more appropriate as the day the wise men finally arrive and give their gifts.  Wise men are few and far between these days and if they don't show up by January 6, I'll understand.

My suffering is but a pale shadow of what the city and the country around me have endured this year.  Natural disasters, weird governance, and as the year ends, a panicked attempt by extremists to turn our Buddhist, Middle Way world into a Manichaean warzone.

Yet this dark moment in my life is also a moment of supreme optimism.  It is like the moment of maximum tension in the development section of a sonata, because it is at that moment that you finally beginning to realize that you will end up coming home.

This year, my music had artistic triumphs in London and California.  This year my adopted son made a major breakthrough as a composer.  This year Trisdee became a national celebrity as people in Thailand started to realize his international credits are "the real thing".  This year I saw my adopted son Johnny in California, his natural habitat, for the first time in a decade.  This year I stood in my two other "homes" - Europe and America - and tried to assimilate the traumas and triumphs of each - and realized that my three cultures are so deep inside me that they cannot be unravelled.

This was also the year in which the orchestra of young people I built up made incredible strides, played impressive performances of real symphonies, made a CD, and was accepted into competition in Vienna. Of course I still have to raise the approximately 5 million baht it will take to get 50 young musicians to Europe but still, this is an amazing step for young serious Thai classical musicians.

It was the year in which I finally came to terms with the darkness and light of my five years at Eton, and in which the school invited me to compose a new opera for the amazing resources they have ... which will bring to fruition a process which really started at the school, where I made my first attempts to compose an opera more than forty years ago.

We are inching towards Epiphany now ... but there are still no Christmas presents and I am still wondering how I will survive the next few days.

I still believe in the mythic view of the universe: the hero's journey, the war between the dark and the light, and that my purpose in life is to rescue princesses from dragons, though the princesses come in more and more outlandish shapes as I grow older.  In myths, the fate of the entire universe always ends up resting on the shoulders of one man. This is true whether the myth is Christianity, Batman, or Heracles.  One is told often enough that reality "isn't like that" but I seem to recall that when I was 10 years old, during the Cuban Missile Crisis, the total destruction of the human race did appear to hang on one person's decision.  Is is perhaps supremely arrogant for us to believe that as individuals, we have the ability to change the world.  Nevertheless, without such beliefs, the world would never have changed.

I do begin my Fifth Cycle Year at a particularly dark moment.  In 2011 I pushed the envelope very very hard.  The envelope appears to be torn, and I don't know how to mend it yet.

Oh and here is the link to where The Nation has named me on of Thailand's international top 40....