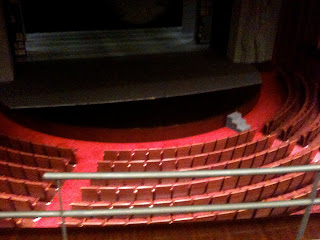 Sorry to tell all these stories in the wrong order, but I think I should go back and continue the tale of the China summit while it's still relatively fresh in my mind.

The day after the curious production of La Traviata, the Chinese planned a long day of speeches in which all of us had to talk for 20 minutes about the state of opera in our countries. Interestingly enough, they had a lady with a bell to go "bong" when the minutes were up, but most speakers seemed to ignore her.

Some of the stories people had to tell were far removed from our experiences.  Many of the European houses wanted to tell China to find its own voice, develop its own style, rather than spending this kind of money in imitating the west ... with the unspoken implication that no matter what the east does, it will never be the west.  Which is of course quite true; insofar as opera companies attempt to be neo-colonial imitations of European companies, they will have little to contribute to progress in the arts. 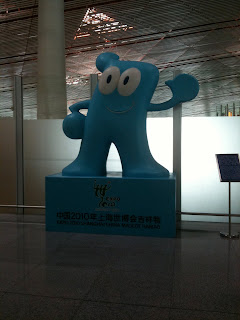 Eventually the time came for my speech and I did mention some of the interesting things I had learned over the last few hours, including the fact that our annual budget is only 0.75% of that of our equivalent in Japanese, the New National Theatre of Tokyo's budget.

Our experience in Bangkok has been quite different from those of China on the one hand and Singapore on the other.  China has made a concerted effort, deciding that it needs parity in opera to get international respect.  Singapore, in its post-colonial way, has been slowly evolving its way towards a national opera, but in a more commercial perspective.  Both countries have mostly been mounting "top ten" works, but China has also produced some of its own operas, though I cannot tell if these are sort of assigned by committee or whether they spring from a single person's vision. 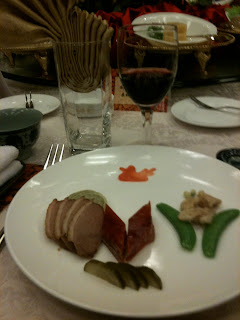 As a person with a European sensibility myself in most ways I am more drawn to seeing the operas composed by Chinese composers.  I don't want yet another Traviata.  This is I suppose how the Bangkok Opera differs as well; we keep trying to exercise a uniquely Asian perspective.

Later came the signing of the "opera treaty".

It was amazing to be on this document, which pledges mutual cooperation between instiutions like the Deutsche Oper, La Fenice, and little old Bangkok.

Amazing, too, to be taken to the restaurant where Peking Duck was invented, though I must admit I found it a little dry.

Most fun of all — the sitting around at the bar when it was all over.  A lot was achieved in terms of cooperation there.  I discovered that Korea is producing Lulu.  I'm going to organize a mass tourist trip to see it ... a weekend of Berg and Bulgogi sounds like just the thing ...
Posted by Somtow at 11:04 PM