A Moratorium on Red Shirts 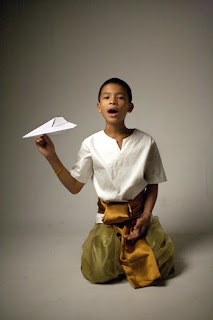 The red shirts plan to go marauding through Bangkok on Saturday, but I will not encounter them.
In a few hours I will leave for the Thailand Science Park in Rangsit, where for 3 days I hope to face 80 inquisitive young minds at our "Bach to the Future" camp.  I've always dreamed of creating a situation where the divide between art and science can be bridged.
Around 1980, I was in the lobby of the Sheraton in Boston where I encountered Marvin Minsky for the first time.  I had no clue who he was.  There were two pianos in the lobby.  We both started playing.  After a moment, it became clear that, even though we were both improvising, each was completely aware of what the other was doing, and the music began to gel into a complex and logical construct, far more integrated than one would think possible, and far bigger than either of us could create alone.
Five hours of playing together later .. having astounded all the attendees at the science fiction convention we were at ... I was finally introduced to Marvin.  I had heard of him, of course; he almost singlehandedly created the Artificial Intelligence.
One of the world's great neurobiologists is V.S. Ramachandran.  When he and I were children, we used to dress up in bedsheets and improvise huge scenes from imaginary operas.  We created an artificial language in which to express the alien emotions of our characters.
What I'm saying is that music, so often, forms an underlying system of paradigms or structures that scientists intuit very well.  There is a reason why Pythagoras numbered music among the scientific/mathematical disciplines.
I hope to spend the weekend leading a ragtag band of independent thinkers into this virgin territory.
Posted by Somtow at 10:30 AM