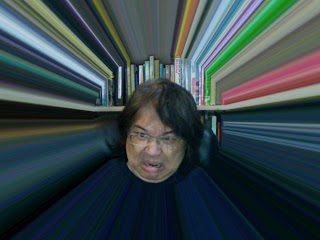 Soon it will be passover, but the red shirts may be unaware of this as they plan their latest plague against Pharaoh Abhisit.  They've announced they're going to drain 10 cc of blood from each member of the crowd for a total of 1 million cc, and (according to the Bangkok Post) put it all the gates of Government House.

I'm not quite sure how this can result in the dissolution of the Lower House.  However, I suppose that the red shirts' other measures, such as breaking a pot in front of the statue of King Taksin, calling down a curse on the government, throwing plastic bags of rotten fish, and having the ex-PM descend through the airwaves from a place variously described as Germany, Cambodia, and Montenegro, have not worked.  They were all very imaginative methods of bringing about political change, but when you have the all the resources of witchcraft and the supernatural at your disposal, why stoop to such mundane devices as, for instance, lobbying one of the smaller parties to switch sides so as to shift the balance of power?

Anyhow, this ghoulish act of smearing blood on the entrances to Government House doesn't appear to have anything to do with passover.  It is so that our evil government will have the shame of having to "tread on our blood" before they can get to work.

Now it would indeed be shameful if the government had slaughtered the red shirts and were stepping over their bloodied corpses in order to reach their place of business.  While of no practical use, I could see the beauty and symbolism of using blood in this way.

However, this blood isn't being shed by the evil government.  If you have not in fact been attacked, attacking yourself and then trying to guilt the opposition is pretty childish; it's right up there with "see what you made me do".

In fact, the only actual casualties so far have been two soldiers, wounded when a grenade was lobbed into their midst.  The red shirts have claimed that this is an act of provocation in that the government must have lobbed a grenade at itself in order to discredit the protesters.  It is a bit far-fetched, but then again, now they're doing the same thing ... without even bothering to disguise it as an attack from their enemies.

I think that it's time for several people to grow up.  The rural poor have a number of genuine grievances. These grievances will not be solved by making a rich man richer.  Magic spells and bags of shit will not solve their problems either.  Throwing money might be a quick fix.  But not in the long term.

The use of voodoo rituals, mob-buying, and fish-slinging as political devices won't end without a real investment in education.

Then again, why bother?  According to Pat Robertson, voodoo worked fine for Haiti, and you can make a deal with Satan to delay the earthquakes by two hundred years.
Posted by Somtow at 2:06 AM