I can't save the universe, after all.... 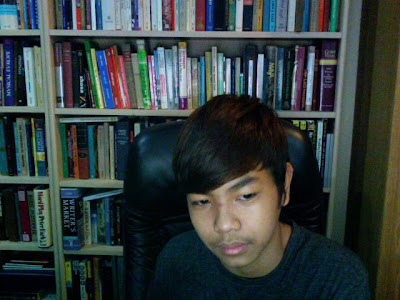 About five weeks ago, my housekeeper introduced me to a fatherless boy who needed a job. Although we didn't really need anyone, the kid had a kind of charisma and everyone immediately liked him. So I thought, all right, he can be a houseboy, do errands, and what have you. I gave him a really cushy job. (His previous job was as a restaurant slave; long hours, sleeping in the scullery.) Here, all he had to do was make coffee in the morning, and bring me dinner as I labor on my latest opera.

He soon became well-loved by everyone at the opera, including all the opera stars who called him "the coffee cherub" because of the cheerful way he would always bring them coffee. He worked really hard and showed a little bit of musical talent as well; we were considering the idea of sending him to have lessons and also getting him out of his illiteracy. He was having the time of his life!

Then at the end of the month, he took his monthly big time off and went to see his mother. Like many peasants who work in the city, he gave her his entire paycheck. When he came back he was a bit ... strange. Two days later he told me his grandfather had died and he needed to go to the funeral. He was gone for several days. One his return, he was even ... stranger.

He had only been back for a few days when he showed up in my work room late at night and asked for some advance money. I thought nothing of it. After all, he had given his mother his entire paycheck, so he probably just needed a bit of cash. I was about to hand it to him when he said, "I have to go. My mother just called and she wants it now. I'll be back soon." His mother lives out of town.

I said, "But you just gave her your entire paycheck."

His mother called again. He came to me and said, "My mother says I am to go to my sister's house, get money and bring it to her immediately."

My housekeeper, who originally brought him in, called the mother and said, "Why are you asking your son to bring you money in the middle of the night? Can't it wait?"

The mother said, "Okay, just tell him to bring the money at the end of the month as usual."

Then she called her son again and told him to get money out of me and bring it to her. I said to him, "I'm happy to give you extra money, but you can't just go off to another city in the middle of the night. The carfare alone is more than your mother is asking for (about ten bucks)."

She called him again. He comes back to my office and says, "My mother says I have to quit because you won't let me take her the money now. Goodbye. Here's the cell phone you gave me back." And he leaves the room.

The phone rings again. The housekeeper answers. The mother says to her, "What can I do? He insists on quitting."

And the coffee cherub is gone. His mother has instructed him to walk out to the main road and "someone will give you money to bring to me." She wanted the money so desperately she made him quit his job.

So I'm thinking, what in the world is so important that costs $10, and a woman is willing to make her kid give up the first chance he has ever had in his life of getting an education, being taken care of, being with people who for the first time are interested in his future, meeting dozens of people who want to teach him and help him etc etc etc .... and he has to go across a crowded megalopolis in the dead of night to give it to her?

The only thing I can think of that fits the evidence is that she must be a junkie. It took me a while to realize that because I don't really know any ... at least not socially ... I don't think. If there's another explanation that fits these facts, I'd love to know it.

Now I am very sad. It is clear to me that there is nothing I can do about this. I can't save the universe after all ... not all of it.
Posted by Somtow at 11:20 PM