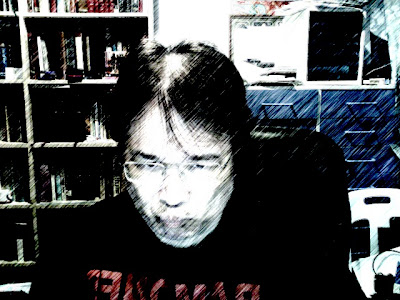 Yes, it seems that I do have twitter. When I joined it 2 days ago, I had an average of one new follower every 10 minutes, but that's all died down now; I'm lucky if a new one adds every 5-6 hours. On the other hand, those searching for Somtow are told to go look for Tommoh.

My secret identity has been discovered!

I'm currently preparing about half a dozen operas, in various ways. On top of the heap, though, are the Bruce Gaston piece and Thaïs. It's rather interesting, isn't it, that one of the operas is about the sex industry, and the other is about AIDS.

In Thaïs, set in Byzantine Egypt, a monk successfully converts the most notorious hooker in Alexandria to Jesus, but once she has been converted, realizes that he really wanted to get into her pants, but now it's too late. In Bruce Gaston's opera which we are premiering soon, an enormous Tiger serves as a metaphor for HIV.

Mike Mahalo, the costume designer for Thaïs, was speaking to the choir last night, explaining his concept, which begins with the idea that the Greeks had wholly different notions of what nudity means. How then to create clothing which implies that people are wearing nothing underneath while simultaneously addressing the priggish concerns of contemporary societal codes? To find out how Mike solved this problem, you will just have to come to the opera....
Posted by Somtow at 8:14 PM