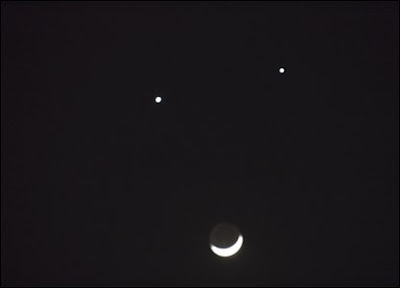 Last night, a Venus-Jupiter conjunction over Bangkok turned the night sky into a smiley face. On my radio show, I played the lullaby from my Pridi Symphony and scenes from Rigoletto, plus a scandalous rap song composed by Bruce Gaston. I only realized as it was playing how subversive the song was even after a twenty-year interval.

I now read in the paper that the anti-government protests are winding down now, and that the future looks brighter in some ways. Whether this is a consequence of the smiling moon, I know not.

I also read the following in the paper: "After the search, police found many weapons together with narcotics such as weeds and cough syrups. "

What an astonishing combination of illiteracy and puritanism! For a moment, I almost thought I was back in America, in the dark times of Dan Quayle's potatoe. I've not encountered any widows wearing narcotics in a while, but I assume that with hemp-based cloth, such mourning might be possible.

(That is, assuming that marijuana is a narcotic. Cough syrup, now, that's another matter. I was once told by L.A. teenagers that if you drink several bottles of , you will have hallucinations. They also told me that boiling morning glory can produce a heroin-like substance. Perhaps that accounts for the popularity of Phra Ram Long Song, Thai dish made with morning glory and curry sauce. The teenagers in my former neigborhood in L.A. sure knew a thing or two. Here in Thailand, all the teenagers I know are too busy playing piano concertos and composing operas to have to learn how to inhale the nitrous oxide from whipped cream cannisters....)

Today, the airport has opened, and it is the birthday of the King of Thailand. A frightening air of normalcy hovers over us. One suspects the worst....
Posted by Somtow at 1:18 PM