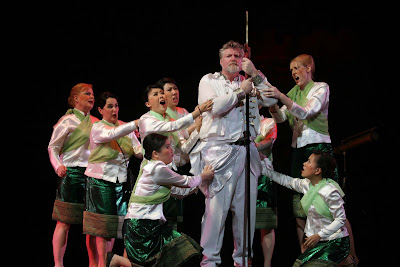 Die Walküre in Bangkok? With a world class cast and a fresh Asian viewpoint? Impossible!

As I write these words, I'm taking what some would call a well-deserved rest, sleeping all day long in a hotel room in Macau. I come to this hotel when I want to escape for a day, because if I go to, for instance, Singapore or Hanoi, I would probably run into someone I know. This place is also across the street from the best barbecued pork I've ever had. However ... though I haven't left the room all day ... I looked up at the CNN screen which is running in the background ... and I notice that the police are wildly beating up a bunch of tourists here, who are protesting because their tour guide has taken them to too many shopping malls. It is apparently something of a riot!

What a relief from Thailand, where people only riot over such mundane matters as political corruption!

As the fallout begins to come in from Die Walküre, it is becoming increasingly clear that this production was a turning point. Not just as the fulfilment of a childhood dream (though of course it is the ultimate power fantasy to be both conducting and directing The Ring Cycle) but after November 30, the idea of "what is artistically possible in Thailand" suddenly became much bigger. After all, this was operatically the biggest, most daring thing ever done here, with the most accomplished batch of world-class singers and the the most ambitious work for a local orchestra. Of course, it didn't all work, but I'm getting many more approving emails than usual, many from completely strangers. There's a "feature review"coming out this Friday in the Financial Times; that doesn't mean they liked it, but it does mean they considered it an important event. Anyway, they didn't like the recent Covent Garden or Vienna Rings, so panning us would put us in great company.

Perhaps all the drama will never be told ... at least, not until I can find someone to buy the next installment of my memoirs. At any rate, I'll spill the beans a bit at a time over the next few days, because I'm still sooooo tired....
Posted by Somtow at 11:48 PM