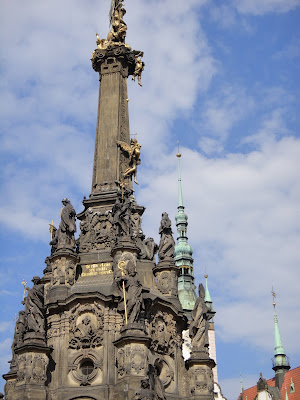 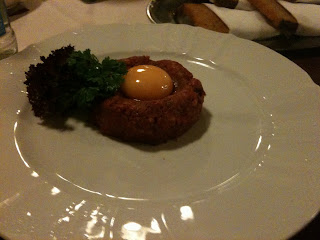 Some of this raw meat is illustrated to the left.  Though I rarely eat steak tartar, there is a particular restaurant here, the Moravian Restaurant, which has the tastiest raw beef I know of.  The condiments are supplied separately so that you can mix up your own, but to me a little bit of salt, a large quantity of chopped raw onions and just a dash of the other half-dozen spices is enough to just highlight the high-quality Argentine meat.  One wonders what people did in Austria-Hungary in the days before it was possible to kill a cow in South America and fly in the meat.  Could this dish have been so delicious in those dark times? 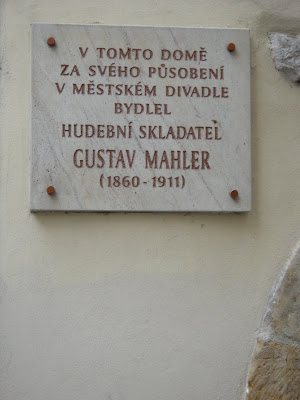 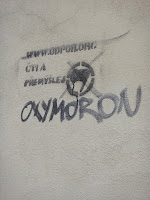 Olomouc is a town that has special meaning to me because it was briefly visited by the two most important composers in my personal pantheon, Mozart and Mahler.  Mozart came here at the age of 11 to escape a smallpox epidemic in Vienna, and composed a symphony (No. 6) while he was in town.  The Olomouc theatre was the site of Mahler's first opera director's gig — he didn't stay long — and standing in the same spot two years ago to conduct an opera which perhaps Mahler also conducted here, Nabucco, was a very uplifting experience.  This time I went to the house he lived in which is ornamented on the one hand with a memorial plaque, and on the other with some rather disturbing graffiti.  The word "oxymoron" could well be applied to many aspects of these composers' lives (though not to their music.)

Although Mahler didn't have a very good time in Olomouc, there's now a bust of him just before the stairs of the Moravian Theatre, so presumably one must pay homage on one's way into the opera now.   Mahler's struggles give me hope that once I'm dead, all the institutions which have given me so much grief will put up plaques of the "Somtow once defecated here" variety and appropriately sanitized busts will be located in strategic places. 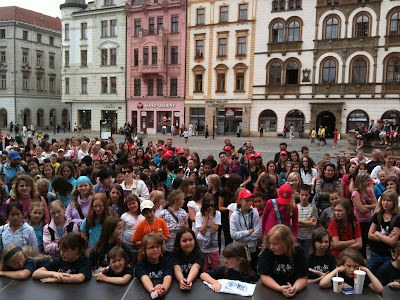 Here's a photo of the kids on the first day (under 12s mostly) awaiting the results of the choir competition.  A lot of screaming and crying.  The last day, with mostly adult choirs competing, was a little more sober.  The Singaporeans must have been happy as they scored several gold medals.  Indeed, they rehearsed themselves silly (as did the Malaysians I think).  The Asian choirs are always dressed to the teeth, whereas local Czech groups, particularly the children's ones, often just show up in matching T-shirts.  I think it is a measure of the fact that Asia takes its invasion of Europe very seriously.  The Singaporean choirs all, I believe, receive government funding.   In terms of technical ability, discipline and choice of repertoire I think the Asians acquitted themselves well and impressed the local judges very much.
For sheer musicianship and penetration into the heart of the European choral style, though, one would have to give the edge to the Poles this time.  Their performances of works by Bruckner, et al, were exemplary.  Indeed one could not have asked for a better performance of Bruckner's Ave Maria than they gave, completely blowing away an already impressive performance by a Czech ensemble of the same piece.
By this time tomorrow I'll be in Bangkok.  Wildly moving forward on Opera Siam's first European tour. Bemusedly watching the election and wondering how it will affect funding for the arts ... such as it is.

Here is a panoramic picture of the judges (except me, unfortunately, since I took the picture) sitting around after one of the judging sessions at the Moravian Restaurant.  Jiri Klimes, the organizer of the entire shebang, knows what he likes and likes what he knows; we always therefore meet at the same restaraurant.  Unfortunately the panoramic view of the camera couldn't capture the plate of raw beef in front of me...
Posted by Somtow at 4:51 PM