Thoughts About My Teachers 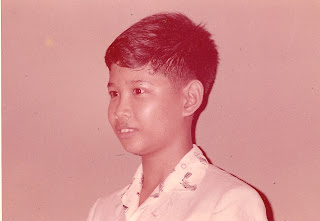 Started more than five weeks ago, on teacher's day....

Today is Teachers' Day in Thailand, when it is traditional for Thais to present their teachers with flower garlands and to thank them for handing on the gift of learning.  So one of the kids in the Sinfonietta told me today that I was the best teacher he ever had.  Which is probably true, not to boast or anything, because I do have two qualities that can make an inspiring teacher: (a) I know a lot (some would say "everything" but that would be a monstrous exaggeration) and (b) I love nothing more than to share what I know.

I received these two gifts from two teachers without whom I could never have achieved any of what I've done in my life, and today I would like to talk about these two people.

During my childhood, the person who did more than anyone else to make me who I am was a teacher named "Noonie".  Her real name was M.R. Smansnid Svasti.  And this is how it happened.

In the 1960s, I came back to Thailand from an early childhood spent in Europe, and after only a few days in a Thai school, I was kicked out for ripping the teacher's dress in a fit of pique.  It was really frustration not only about the language problem (I couldn't yet speak Thai) but also at the formulaic techniques of Thai education at the time.  So my parents sent me to a British school, the Bangkok PNEU, which at the time was operating without a license.  It was an attempt to create a British-system school in what was, at the time, the middle of nowhere, without a real curriculum and few textbooks ... and the school building was actually a rented private home, the house of film star Amara Asvanond.

Noonie was a member of the Thai aristocracy whose family had followed King Rama VII when he left Thailand for Britain after the political confusion of the 1930s.  She was a wild maverick; in a sense she was a "hippie" long before such existed.  In the 1960s she had just returned from England and was full of passion about many things.  (Later she would become known as an important environmental activist.)  She seemed to us to be quite mad, but her madness hid an exceptional grasp of the world's underlying realities.

Because there was no curriculum, we were allowed to study whatever was in the school storeroom.  There were 40 copies of Shakespeare's King John, so that was the first Shakespeare play we read in depth.  We ransacked the storeroom again and got Euripides.  I produced my first play, a mishmash of all three Greek tragedians' Electras, minus the depth but plus a barrel of gore -- no messengers relaying offstage violence for me!  Played the leading role, too, though I forgot my own lines.  Noonie was also a fine musician, at one point sightreading a string quartet I'd composed at the piano.

The most important thing I learned from her, however, was how to handle shit.

You see, in my play, many of the characters wore masks, which we made ourselves from papier-maché. The airmailed editions of European papers, on wafer-thin paper stock for cheap mailing, made great raw material. Noonie taught us to make clay face masks and to mould the papier-mâché to the clay.  However, the weather in Bangkok being what it is, the mass of wet paper soon started to rot and smell very bad.  I didn't want to get into the stinky mess and I demurred from helping to make those masks.

It was then that Noonie taught me one of the most important life lessons.  She said, "If you're going to create great art, it's not enough to have your head in the sky.  You also have to have your hands in the dirt."

And this is an important truth I try to live by every day.

Next time I will talk about the other teacher who changed my life, Michael Meredith at Eton.

Only when I am through with the "good things" will I address (and I have been requested to by many) the latest round of political tomfoolery that is threatening the beautiful house of cards that is this country....
Posted by Somtow at 10:29 PM